Stories of the Open Road

Ruta 40 stretches almost 5000km from the Bolivian border to Tierra del Fuego.  It’s long, sparesly populated, and traverses some beautiful scenery; Argentina’s version of Route 66.  In our last leg we followed Ruta 40 for 1200km from Cafayate to Mendoza.

To break up the desert scenery there are a number of shrines along the roadside.  They are spaced at regular intervals have tables and flat spaces … perfect campspots! 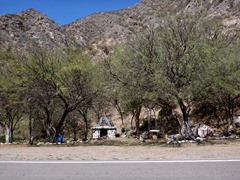 The shrines are dedicated to local Argentine heroes.  Pictures from our journey are broken up by two of our favourite stories. 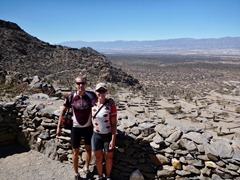 At the Pre-Incan Quilmes ruins on our first day on Ruta 40. 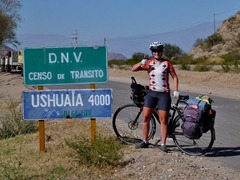 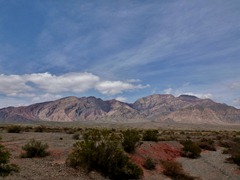 The road followed valleys past many crazy rock formations. 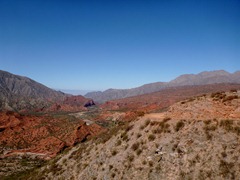 Looking back at the dirt road through Cuesta de Miranda (Miranda’s Pass) near Chilecito. 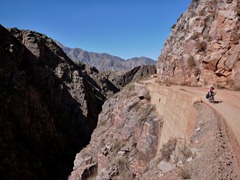 When Maria Antonia Deolinda Correa’s husband was recruited by the army in 1850 she was devastated.  Desperate, she took her newborn baby and followed the army into the desert.  Short on food and water she eventually collapsed of thirst.  Several days later shepherds found her body with baby still alive suckling milk from her breast.

The shepherds buried her body and raised the baby.  Years later another shepherd who had lost his cattle in a storm and found her tomb while looking for them.  He prayed for the cattle to be saved, and miraculously found them grouped on a hill. 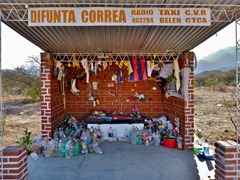 Now people have created shrines where they leave full bottles of water and construct small houses.  They ask Difunta Correa for miracles or help with things in their own lives. 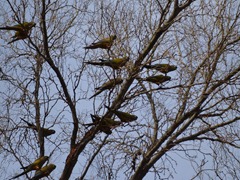 What the heck is that noise? Wild parrots on the roadside. 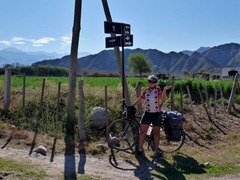 Good thing we have our GPS … 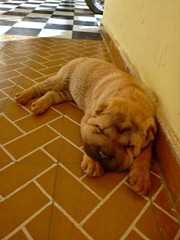 Possibly the cutest puppy ever, at our hostel in Chilecito … until it started chewing on our tent.

After being recruited for two different civil wars in the late 1800’s, Antonio “Gauchito” Gil was tired of fighting and deserted the army.  As an outlaw he became somewhat of a Robin Hood.  He would steal from the rich and protect the poor.  Eventually the police caught him, hung him in a tree by his feet, and tortured him.

To one of the policemen Gil said “Your son is very ill. If you pray and beg me to save your child, I promise you that he will live. If not, he will die".  Then the policeman slit his throat.

Upon returning to his village, the policeman discovered that his son was very sick.  He prayed to Gauchito Gil to save his son, and miraculously his son recovered.  So Gauchito Gil saved his killer’s son. 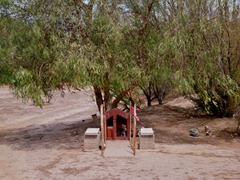 Today people hang red rags in trees to celebrate Gauchito Gil and ask for their own miracles. 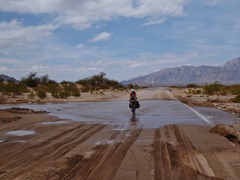 Ruta 40 had hundreds of drainages across the road. Fortunately only a few were flooded. 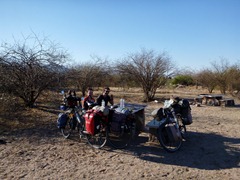 Camping at a Difunta Correa shrine with fellow cyclist Markus. 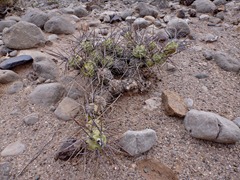 There were prickly things everywhere along the route. We don’t know what these are really called, but we refer to them as “Argentinian Death Cacti”.

Hope you enjoyed the pictures and the stories.  From here we cross the Andes from Mendoza to Chile and continue down the coast towards Patagonia.