At the time we may not have realized it because we were so awe-struck by the natural beauty, but Bolivia really worked us.  The food/water, climate and harsh conditions took a huge toll on us physically.  By the end of the Lagunas region we were really hurting for some of the creature comforts we take for granted at home (like central heating, potable water and fresh produce).  We were both suffering from chronic digestive tract problems and were excited to reach Argentina where reportedly all tap water (unless otherwise noted) is drinkable, elevations are lower and temperatures warmer. 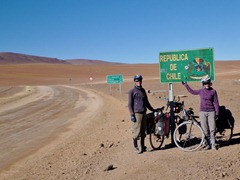 Before reaching Argentina we would have to pass through the Northeastern corner of Chile, which is so remote we never officially entered or exited the country.

The map we acquired said it was 80km from the Bolivian border with Chile to the first town in Argentina, Susques.  Unfortunately for us, this map was horribly incorrect and it was more like 240km.

Fortunately for us, we were carrying enough food and water and the scenery was still spectacular. 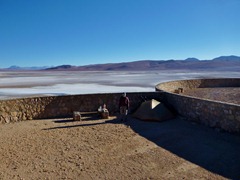 Also the roads were all paved now, and there were perfect lookouts like this one for camping out of the wind. 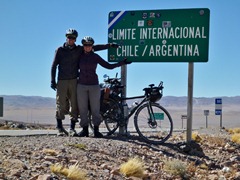 Once at the border it was easy passage into Argentina (we were worried because we were carrying lots of fruit after having spent the night illegally in Chile).

The only thing at the border was a gas station, but it was super modern compared to anything we’d seen in weeks.  We passed a couple hours eating paninis, drinking REAL coffee and using the free WiFi.  We made the final push to Susques and arrived as the sun set over a beautiful red valley.  Our rest day was extended to two here due to lingering stomach problems.  We finally set out again and completed our last pass of the trip over 4000m. 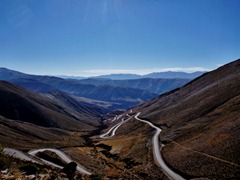 The descent into the famous Quebrada Humahuaca.

We reached Jujuy and there we began to learn just how seriously Argentinians take their siesta (what do you mean the restaurants don’t open until 9pm?).  We also learned of hot springs in the area and spent another rest day soaking our tired muscles. 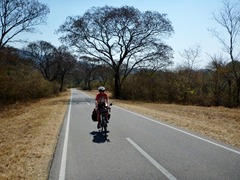 One of our favourite roads of the trip.  “Mini” Route 9 winds its way from Jujuy to Salta at a mere 4m wide past beautiful forest and lakes.

In Salta our stomachs were finally feeling better, so we used the opportunity to feast. 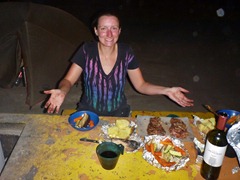 When is Rome… Enjoying a meaty feast prepared over fire. 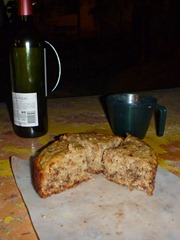 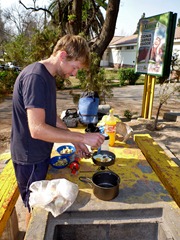 Banana bread prepared in our “outback oven” and a full breakfast with eggs (unlike Argentinians who only eat bread with condiments and coffee).

From Salta it was only two days to our next destination, the famous wine region of Cafayate.  Again we followed a stunning canyon, full of amazing natural features. 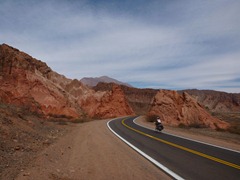 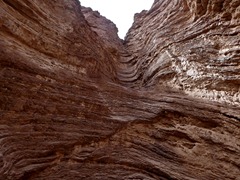 Jenn riding in the beautiful terrain and the Devil’s Throat, an amazing feature carved by water. 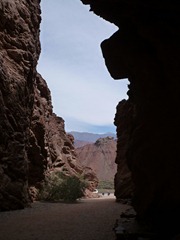 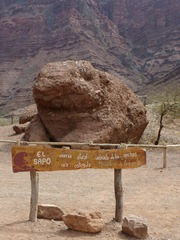 View back to our bikes and the valley from inside the amphitheatre and “The Toad”.

In Cafayate, we really got our rest on.  We spent two days visiting wineries and cheese farms for tastings, eating world famous empanadas and enjoying the warm weather.  The climate is amazing and perfect for grapes, with a whopping 340 days a year of sunshine. 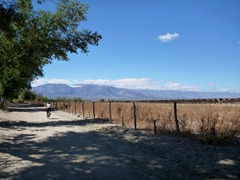 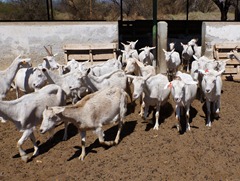 Country roads on our way to a goat cheese farm and the Swiss goats used to make the delicious creations. 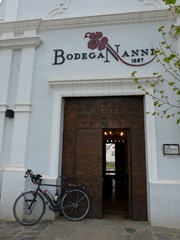 Bikes are the best transportation for numerous wine tastings in a day, also a  normal sized wine bottle fits perfectly in the water bottle cage. 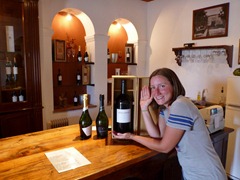 Unfortunately this 3L bottle was a little too big for us to carry away. 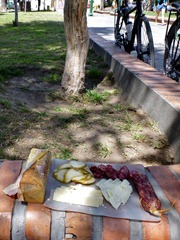 Doesn’t get much better than artisanal cheeses and salami for a picnic in the park. 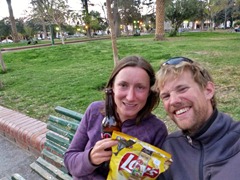 A little less glamorous meal in the park, microbrew beer and chips, while we wait for siesta to end so we can buy groceries for dinner. 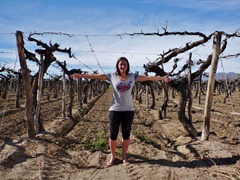 All in all we are now feeling rested and ready to take on the challenges of rural Route 40, South to our next big destination of Mendoza, another wine town.