What is the Carretera Austral?

The Carretera Austral (The Southern Highway) connects communities in the remote and rugged Patagonian region in the South of Chile.  We travelled from Futaleufu to Villa O’Higgins in about 15 days of cycling.  It’s definitely our favourite section of the trip so far but we can’t exactly say why.  In this post we detail seven different things that the Carretera Austral and the region of Aysen are to us: 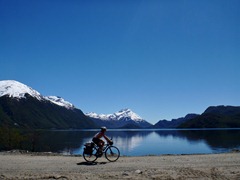 Above all, the terrain is gorgeous.  The road winds through mountains and glaciers, and around turquoise lakes. 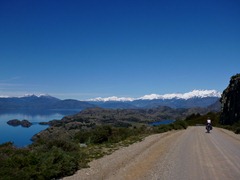 Riding along the gorgeous Lago General Carrera on a windless day. 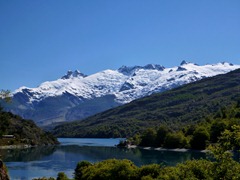 Glaciers not so far above the junction of Lago General Carrera and Lago Bertrand. 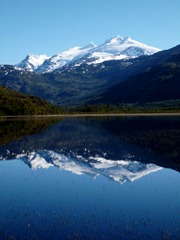 I don’t even know the name of this lake or mountains.  There was just so much beautiful scenery. 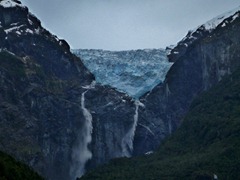 Patagonia is known for some pretty adverse weather.  This area in particular gets a lot of rain.  Some areas up to 5000mm per year!

To start our trip we got really wet.  In our first seven days on the Carretera we had five days of rain, and one of snow … yuck. 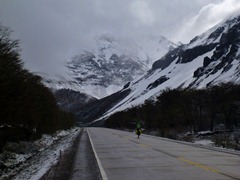 Riding through a clearing snowstorm in Paso Cerro Castillo. 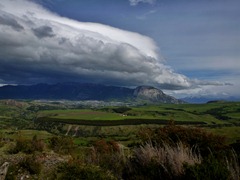 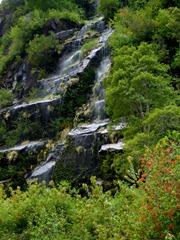 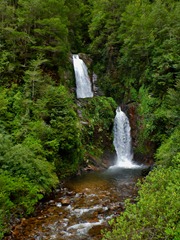 All the rain meant that the waterfalls were flowing with full force.  And they were everywhere!  In fact, Parque Nacional Queulat means “the sound of running water”. 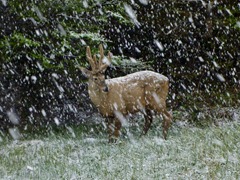 This huemul (an endangered species of deer) wasn’t detered by the snowstorm.

The road was originally constructed between 1976 and 1988 by the harsh Chilean dictator Augosto Pinochet to protect Chile’s sovereignty in the region.  Some sections weren’t even finished until 2003!  So, while there are definitely tourists, there aren’t so many that the region has lost its flavour. The gorgeous Capillas de Marmol (Marble Chapels) in Lago General Carrera.  The caves are made of some of the purest marble in the world.  The light reflecting off the turquoise lake is absolutely jaw-dropping. 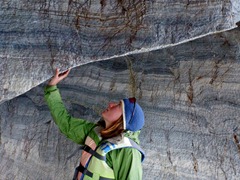 Jenn checking out the marble. 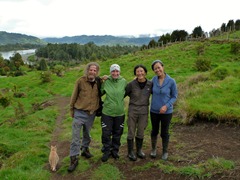 The harder the place, the friendlier the people.  We had many interesting conversations during the trip about the region.  As usual, we had wonderful hospitality from three different warmshowers hosts, like that of Paul and Konomi. 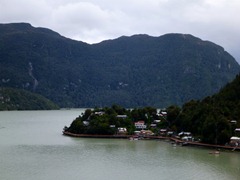 Caleta Tortel is a community of loggers who harvest fallen cypress trees.  The village only became accessible by road in 2003.  Before that there was only a once a week ferry. 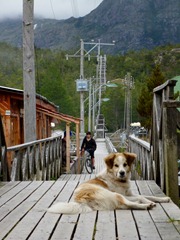 Instead of roads, Caleta Tortel is connected by a series of cypress boardwalks. 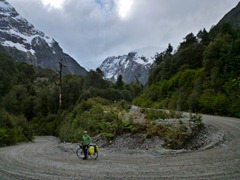 Descending steep switchbacks from the pass in Parque Nacional Queulat.

The road is 1200km long and about 250km are paved.  In some places the ripio (dirt road) is good quality, but in many places it’s very difficult to ride on because it’s made of whatever fill is nearby (so if the road follows a river, it’s made of stones from the riverbed).  Couple this with some really steep hills and bad weather and you’ve got yourself a pretty hard ride.  The Carretera was not the most difficult section of the trip, but it definitely was challenging over a longer period of time. 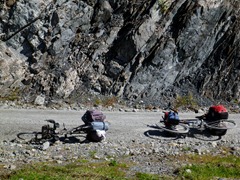 The bikes unceremoniously dropped for a rest in the middle of a long hill. 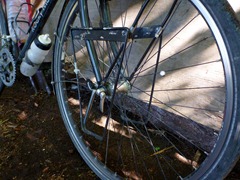 The rough roads were hard on Dave’s “franken-rack”.  It’s been welded twice and is currently held together with a piece to repair tent poles, zap straps, and duct tape.

The Carretera Austral traverses a very large wilderness area, but is only a sliver in the enormous untouched area.  There is an abundance of wildlife; huemules (deer) and birds are everywhere and the rivers are full of fish.

The turquoise waters of the famous Rio Baker joining with the brown glacial water of the Rio Neff. 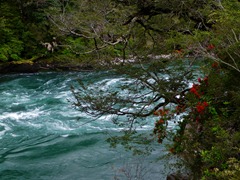 The water in the region is incredibly clear and uncontaminated, just like the people.  Unaffected yet by, and somewhat naive to, the tourist potential of their beautiful part of the world, the people here are some of the friendliest and genuine we have met. 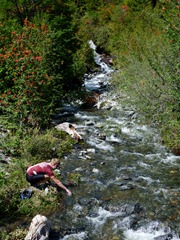 Filling our water bottles directly from another clear stream.

Absolutely Made for Cycling

Sometimes it is difficult to find a balance between enough towns to get supplies and enough wilderness to enjoy yourself.  Here, it’s perfect.  There are towns every 60 – 120km and a whole lot of nothing in between. Stocking up for the days ride in Villa Cerro Castillo. 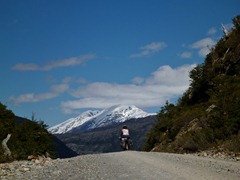 Cresting yet another beautiful pass near Villa O’Higgins. 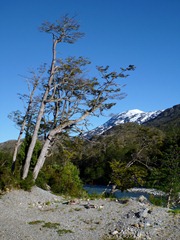 Pretty little campsites line the road.  In this one we fished for dinner, warmed ourselves with a fire, and were only passed by a couple cars in the 12 hours we spent here.

The region is currently embroiled in controversy over the proposed construction of large dams on seven rivers in the area.  But worse, this would mean the construction of the longest transmission line in the world to bring power to Santiago and the mines in the North of Chile. 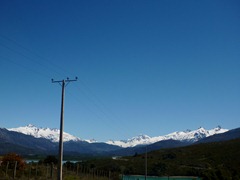 The residents are up in arms, and blockaded the region for two months last year.  After seeing much more horrible environmental atrocities in many other Latin American areas, we can’t understand why we find ourselves lining up behind this one.  Perhaps it’s because the area is so pristine, or perhaps it’s simply because we’ve come to love it and the people in their current state.

Whatever it is, we’re definitely not the only ones.  Environmentalists and nature lovers worldwide are lining up to protect the area with a well financed and organized campaign called “Patagonia Sin Represas” (Patagonia Without Dams). 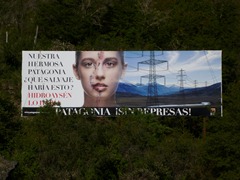 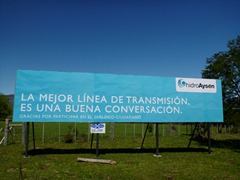 The publicity engines are running at full throttle on both sides.  “Our beautiful Patagonia.  What savage would do this?  Hydro Aysen would.” and “The best line of transmission is a good conversation”.

Who knows what will happen … only time will tell.  Add to this the fact that you can purchase “water rights” in Chile and many international companies already “own” rivers in the region and it’s a complicated issue.  As you can probably tell, we’d hate to see the rivers dammed, but we fear that’s the way the chips will fall. 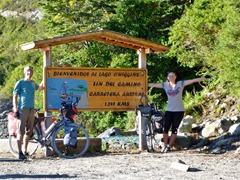 Now we rest for an evening in Villa O’Higgins at the end of the Carretera before travelling to Argentina by a boat and hike combo.