Since meeting with our family in Costa Rica, we’ve continued our ride through Costa Rica and Panama.  These countries have struck us as being very different than the rest of Central America.

The riding through Costa Rica was absolutely gorgeous.  We followed strings of beaches down the Pacific Coast.  In Playa Hermosa we camped right on the beach after watching the sunset.  In Quepos we were able to surf and visit Manuel Antonio National Park, renown for wildlife viewing.  We saw sloths, toucans, macaws, and more howler monkeys.  In Domical we had the generous offer of a free beach house to stay in and were able to take advantage and get in some more surfing.  And in Puerto Jiminez we visited a friend and saw crocodiles and caiman for the first time.  All in all we loved our time in Costa Rica. 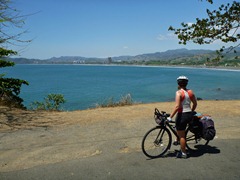 Looking back on Jaco, Costa Rica. 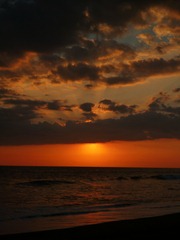 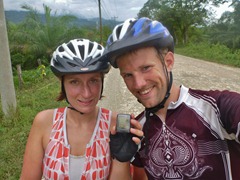 No more digits … resetting our odometers at 10000km!  Note the dirt road in the background. 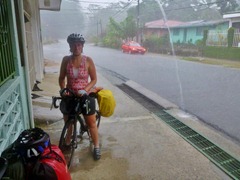 The hardest rain we have ever seen soaked us about 5km outside of Golfito on the dirt road.  In no time the road turned into a river!
Unfortunately we also had a bad experience near Puerto Jiminez.  While we were swimming, our backpack was stolen from a log less than 10m away on the beach, containing our camera, a wallet, towels, clothes, a knife, and the key for the bikelock chaining our bikes to a tree.  In true Central American fashion, strangers stepped up to help us get the bikes off the tree.  This meant cutting down the tree (no small feat at around 18” in diameter and 30’ tall) and bringing the still chained together bikes back to a local handyman who cut the chain with an angle grinder.  Afterwards we had to ride back to town along 5km of dirt road in the pitch black because they’d stolen our light as well!  The locals were shocked, and a friend of a friend even bought us dinner upon our return!

So where would we replace all these things?  What better place than the most Americanized country in Central America, Panama! The next day we crossed the border and the narrow, potholed Costa Rican road instantly turned into a four lane freeway… with a shoulder!  By the end of the day we had replaced our camera with the exact same one which we found in one of the numerous giant electronics malls.

It was only 550km more to our last major destination in North America: Panama City.  The riding itself was hard, with steep hills and very strong headwinds.  You win some and you lose some. 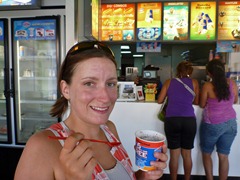 Who said Americanized was a bad thing? 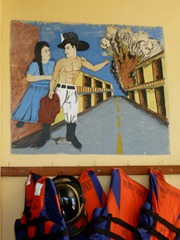 Inspirational painting in the firehall in San Felix, Panama.  The firemen let us camp out back and use their kitchen and shower. 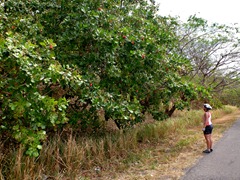 This is why macadamia nuts are so expensive.  One nut grows on the end of each red fruit. 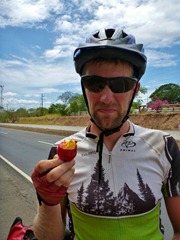 The macadamia fruit has something in it which turns your mouth into a prune.  Some people like them, but we haven’t even been able to finish one.
Finally we arrived in Panama City.  It was an interesting combination of high rise buildings and poverty, but it did have charm!  We also noticed that the city was laid out like a standard American one, with freeways, suburbs, and very few provisions for pedestrians.  We spent a couple days eating, exploring, shopping for the rest of our replacement items, and trying not to get run over each time we stepped off the curb. 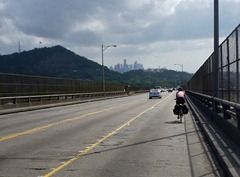 Crossing the Bridge of the Americas into Panama City is like riding a bicycle over the Port Mann.  Thankfully the drivers caught up in the traffic jam behind us on the way up were nice. 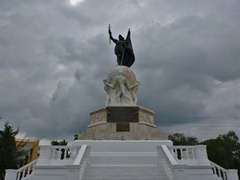 Statue of the famous explorer Balboa.  He was the first European to see the Pacific Ocean.  In typical Colonial fashion, he claimed it and all the lands it touched to be the property of Spain. 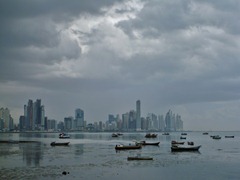 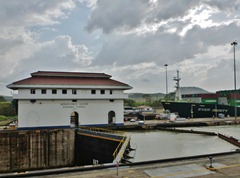 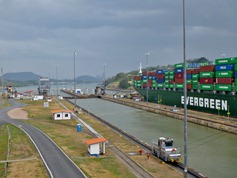 The famous Panama Canal at Miraflores Locks.  The large ship on the right is a Panamax vessel, the largest that can fit through the canal.  This means that it only has half a meter of free space on either side in the 33.5 meter wide locks.
Now we’re on the Caribbean side of Panama awaiting our sailboat to Cartagena, Colombia.  North America has been great to us, and we’re hoping for more of the same as we continue.
Publicado por David Brayden en 7:59 AM