Southern Patagonia is an intense place.  This region of the Andes is filled with jagged peaks and dynamic glaciers that extend almost to sea-level.  The mountains in the West give way to vast, dry grasslands in the East.  These windwhipped plains are called “pampa” here.  And they are so vast and empty that one usually says “pampa, pampa, pampa” when referring to them.

Our time has been split between riding through the mind-numbing pampa and excursions into the mind-blowing Patagonian Andes.

The pampa (pampa, pampa) is notoriously windy.  Life is spectacular with the wind at your back (30-40km/hr), horrible with the wind at your front (5-12km/hr), and frustrating with it at your side (12-18km/hr).  We count ourselves lucky that nobody has been blown clean off the bicycle … yet. 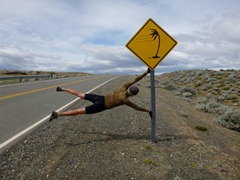 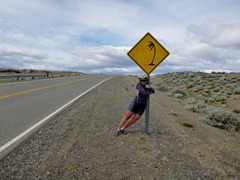 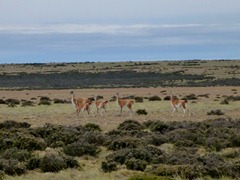 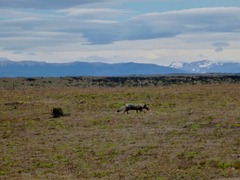 There are quite a few animals who call the pampa home.  Guanacos (an undomesticated relative of the llama) and foxes are common. 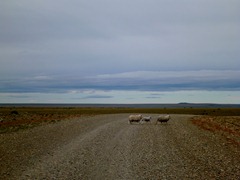 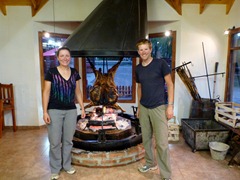 But sheep are the most common sight on the roads as they frantically run from us on our bicycles.  Sheep (not lamb) slow cooked whole over a fire is the regional dish.  It was head and shoulders the best meal of our trip! 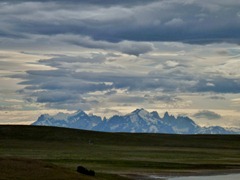 Always with the gorgeous mountains in the West as a backdrop.  The world famous Torres del Paine, Chile.

Our first return to the mountains took us to El Calafate, Argentina and the awe-inspiring Perito Moreno Glacier.  The glacier extends to only several hundred meters from a peninsula jutting out into Lago Viedma.  And it advances at almost 3m a day, meaning that enormous chunks of ice frequently crash into the lake only meters from the peninsula. 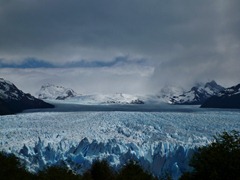 Crowds gathered on the pasarelas (walkways) to watch the ice calving into the lake.

With good reason, this is one of Argentina’s biggest tourist destinations.  People come from all over the world to watch and cheer when a big piece falls… ruining the atmosphere that we would prefer.  However, there were a few times when we had a platform to ourselves and could get lost in the enormity of it, hearing only the creaks and groans, then the unexpected roar, crash, shockwave, and slow tidal wave of a big piece falling.

Between El Calafate, Argentina and Puerto Natales, Chile we rode through about 300km of pampa (pampa, pampa). 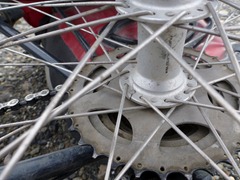 “Dave, your wheel looks really wobbly …” The most unexpected mechanical failure of the trip: a cracked rear hub.  We didn’t even know this happens! 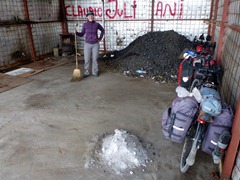 A highway shed made a perfect shelter after a frustrating day with an average speed of 11km/hr on flat roads.  Think it looks disgusting? … we thought it was paradise!

Puerto Natales is located near world famous Torres del Paine National Park in Chile.  It is a picturesque fishing village turned hub for all the tourists heading to the park. 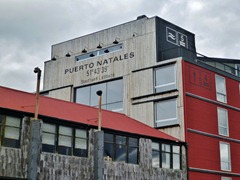 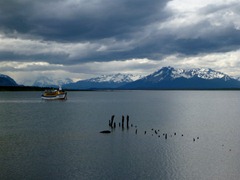 Like everyone else, we went for a hike in the park called the “W Trek”.  It is beautiful, but known for rain, wind, snow, and suffering tourists. 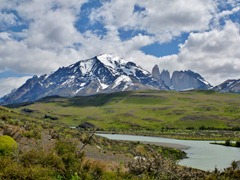 The Torres del Paine massif from the park entrance.  The hike forms a W shape on the left side of the mountains. 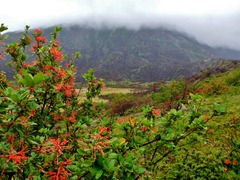 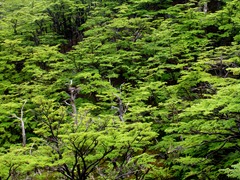 We had lots of rain (and snow) to start the hike.  Fortunately the lush terrain kept us entertained. 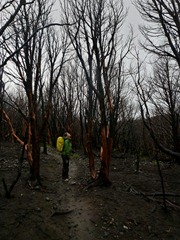 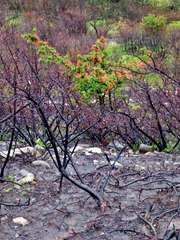 Last year a careless hiker started a fire (while trying to burn their toilet paper that they were too lazy to carry with them) which burned 10% of the park.  Jenn contemplating the ashes and, as always, life beginning anew. 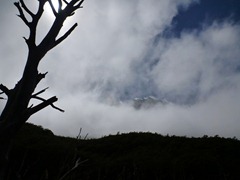 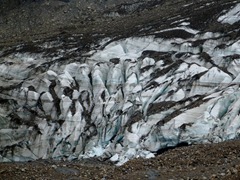 Sights of the Valle Frances (The French Valley). 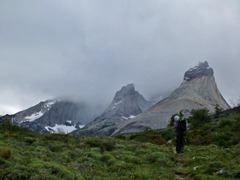 Jenn with the Cuernos (The Horns). 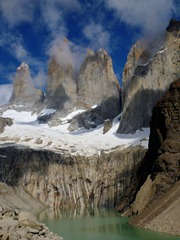 And the park’s showcase attraction, the towers.  Our jaws dropped (and we immediately tripped and stumbled) as we rounded the corner to this viewpoint.

From here we continue through the pampa (pampa, pampa), slowly closing in on Tierra del Fuego and Ushuaia, Argentina.  Wish us tailwinds!