Into the Land of Fire

Tierra del Fuego (“The Land of Fire”) is the Southernmost part of South America.  It got its dramatic name from the Portugese explorer Magellan, who spotted the fires that the indigenous used to keep burning on the beaches.  But more importantly for us, it contains Ushuaia.  This is the literal and figurative end of the road.  It goes no further South.  And so it’s known as “El Fin del Mundo”, or “The End of the World”.

This area of Patagonia is also home to lots of penguins! We were able to see two different kinds: small and rambunctious Magellanic Penguins, and large and regal King Penguins.

Near Punta Arenas we visited a penguin colony on Isla Magdalena. Here, approximately 6000 pairs of Magellanic Penguins come to nest each year! They dig burrows in the ground and are now raising chicks. 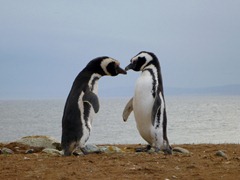 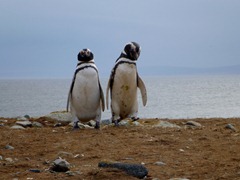 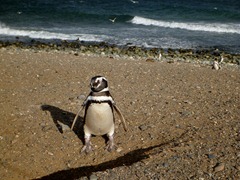 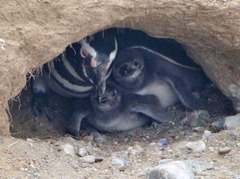 Watching the exciting Magellanic Penguins wobble to and fro.

And in Bahia Inutil (“Useless Bay”) we were able to visit a King Penguin colony. These penguins have just laid eggs and will sit on them for approximately two months. As a bonus, the owners of the land let us camp there for the night. When they closed the gate for the night, it was just us and the penguins. This was definitely one of the coolest experiences of the trip. 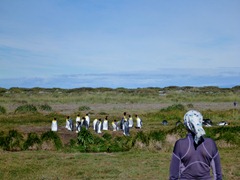 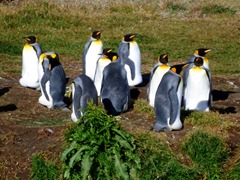 Much better looking, but not so exciting.

Since leaving Puerto Natales we’ve been riding with other cyclists we’ve met on the road.  It’s been a different experience for us, but it definitely adds a little excitement to the pampa. 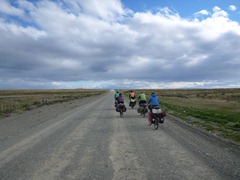 Riding near Porvenir, Chile with Wim (Holland), and Sabrina, Fritz, and Peter (Germany). 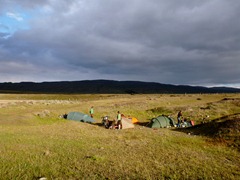 Perfect roadside campsite, next to a lake with flamingos.  We feasted on 5kg of sauerkraut that Wim was given in Punta Arenas. 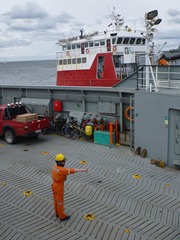 Tierra del Fuego is a large island, separated from the mainland by the Strait of Magellan.  Politically, it’s arbitrarily cut in half by Argentina and Chile.  But it has a unique and distinct flavour.  The land is bleak, and beautiful in its own way.  Oh, and it’s windy … really, really, ridiculously windy. 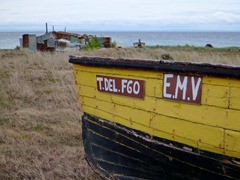 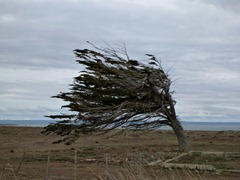 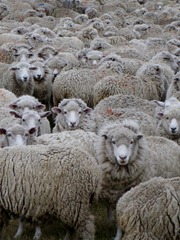 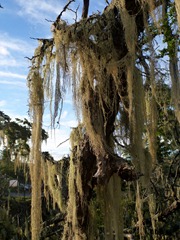 Sights of the road: run down houses, wind, sheep, and old man’s beard.

And now, with mixed emotions, we find ourselves getting closer and closer to Ushuaia. 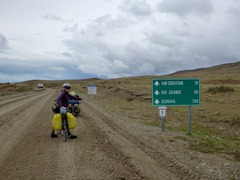 Crossing back into Argentina, three days from Ushuaia. 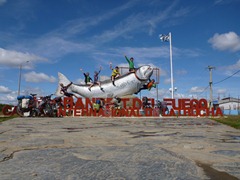 Today we arrived in Tolhuin, only one day from Ushuaia.  There’s a bakery here which is internationally famous among cyclists.  When we arrived, soaking wet, we were ushered in and given a cup of coffee, baked goods, and a place for the night.  After a hot shower, we were spontaneously invited to dinner at the home of a friendly family, and even had money to pay for the cab fare forced upon us.  All we knew when we arrived was their names (this is what we told the taxi driver), but by the end we’d learned a ton about the area.  The kindness was almost overwhelming!

So the next time you hear from us, we’ll be in Ushuaia.  After 15 months we really have no idea how it’s going to feel … we’ll let you know when we get there!