Although Machu Picchu is the centre of Inca tourism, there are many more very interesting sites in the area.  We were fortunate enough to visit some of these near Cusco and on the way to our next destination of Puno on the shores of Lake Titicaca.  In the process we learned a great deal about the Inca civilization and their beliefs.

The ruins of the Inca are very impressive because of their talent for stonework.  There were different classes of workmanship used in terraces, defense walls, or temples.  The stones were shaped by hand with such precision that you can’t even fit the blade of a knife between them.  Along with their beauty, clever design has enabled the walls to stand through centuries of earthquakes that have levelled much newer structures. 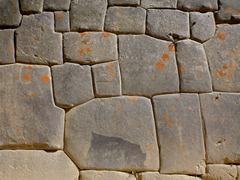 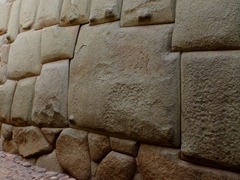 Two examples of Inca stonework.  On the left is a wall in the religious centre of Ollantaytambo and on the right is the famous twelve angled stone in Cusco. 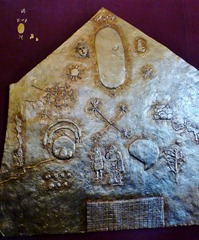 A description of the hierarchy of Incan gods.  The ellipse at top represents Wiracocha, the all encompassing god, while the sun and the moon to the sides represent the masculine and feminine gods respectively.  Lower down are Pachamama (mother earth) and Mamacocha (the god of water) and eventually humans.  Note that the picture is symmetrical, for every masculine figure there is a feminine figure.

Many religious idols were created from solid gold, which is what attracted the Spanish during the conquest.  For example, the walls of some religious buildings in Cusco were entirely coated in gold!  And remaining in one of the temples is a 20kg solid gold figure. The Incans occasionally practiced human sacrifice, but most often it was llamas who were used in ceremonies.

On the way out of Cusco we were able to stop at the site of Tipon.  The road was blocked by landslides, leaving us almost alone in the ruins.

The site of Tipon with many terraces and water canals for growing crops.  The Inca were experts at cultivating and acclimatizing crops such as potatoes, corn, and coca. 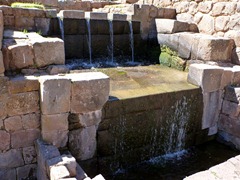 A religious bath in Tipon. 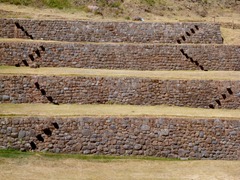 Neat steps for getting between the terraces in Tipon.

Along with the ruins, we’ve met some great people along the way.  Leaving Cusco we ran into Carlos from Argentina, with whom we have been riding for the past four days. 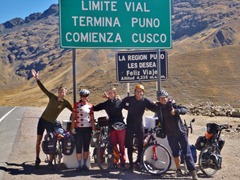 Martina and Jons, Carlos, and us at our last pass of Peru. 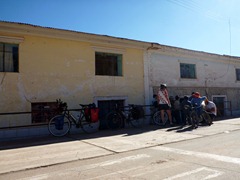 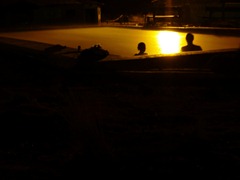 Bathing in thermal pools under the stars between Cusco and Puno. 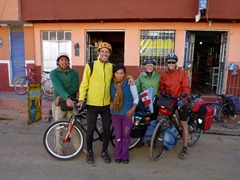 Us with Christian and his family who welcomed us into their hotel with open arms in Pucara and went out of their way to make sure we were comfortable and well fed.

Now we’re continuing to explore around beautiful Lake Titicaca, the largest high altitude lake in the world.  Next stop: Bolivia!