Lake Titicaca sits right on the border of Peru and Bolivia in the high, dry altiplano.  It is known as the highest navigable lake in the world (or the largest high altitude lake) and is the mythical birthplace of the sun and moon in Inca mythology. 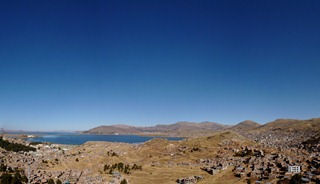 Puno on the shores of Lake Titicaca.

Our last leg has taken us in a semicircle around the lake from Puno, Peru to La Paz, Bolivia.  On the way we’ve seen some gorgeous scenery and have had a chance to visit a few of the beautiful islands. 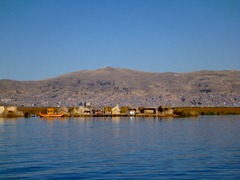 About 600 years ago a group of people called the Uros fled to the lake to escape from the warlike Cholla and Inca cultures on the mainland.  They gathered reeds which grow in the shallows of the lake and constructed boats and floating islands to live in separation and peace.  Today they still live on these islands (about 70 in total) although now the main industry is tourism. 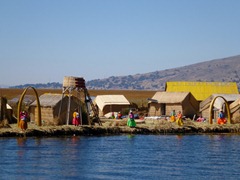 Floating islands and houses made of reeds.

The islands are made by cutting cubic metre chunks of roots from the reeds and tying them together into platforms.  Then the top of the platform is padded with about another metre of reed stalks to create a surface out of the water.  Every week or two they add another layer of reeds to the top to compensate for the decay beneath. 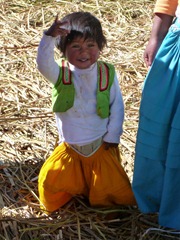 Local girl in her traditional wear. 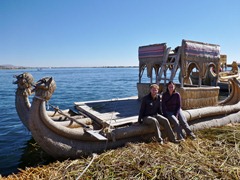 Us with a reed and wood boat on one of the islands.

We also got a chance to stay overnight with a family on an actual island, Amantani.  With them we ate, explored, and danced at a party of locals and tourists. 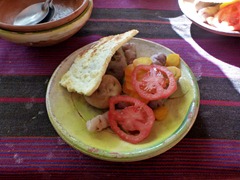 One of Peru’s more interesting dinners of all sorts of potatoes with fried cheese. 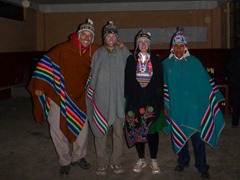 The sun goes down and the party begins.  Us in our borrowed costumes. 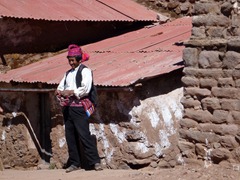 On another island, Taquile, it’s the men who do the knitting instead of the women. 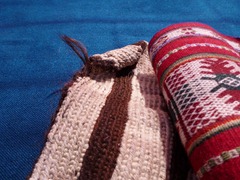 But when a couple gets married the bride makes her husband this belt including hair that she’s collected over her life up until that point.  I think it’s kind of romantic, Jenn thinks it’s gross :)

The last island that we visited was La Isla del Sol (actually in Bolivia).  It is the mythical birthplace of the sun in Incan mythology and definitely the most picturesque island. 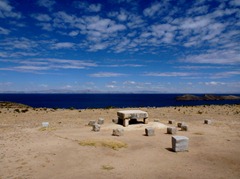 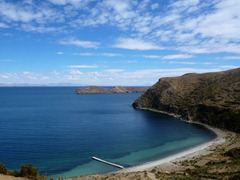 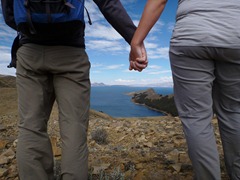 From Puno we rode along the lake for almost three days.  The scenery was soo beautiful that we couldn’t help but think how lucky we were to be here. 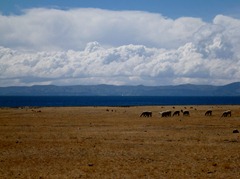 Llamas and the lake. 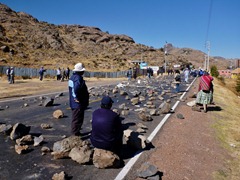 The Peruvian government is in hot water over it’s mistreatment of Peru’s teachers.  Roadblocks like this one have sprung up all over Peru.  It’s no problem to pass through on foot or bike though.  All we get is a friendly greeting and a warning to look out for the glass they’ve broken all over the road. 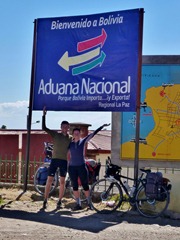 After two and a half wonderful months in Peru, Bolivia at last. 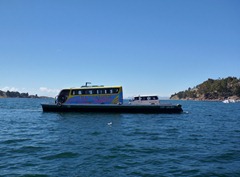 Bolivian ferries are more akin to rafts with outboard motors.  I wonder how many busses have ended up at the bottom of the lake? 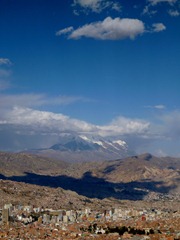 Now we’re resting at the famous Casa de Ciclistas in La Paz and planning our route.  The owner Christian invites cyclists to stay in his apartment to share experiences and rest up.  With approximately twelve other cyclists here it’s hard to leave.