Love in the Time of Swollen Feet

Our first South American destination was the fairy tale city of Cartagena, Colombia.  Originally, we only planned on staying a couple days, but loved it so much that we stayed for five!

The city felt like it was straight out of a Gabriel Garcia Marquez novel … and we found out that Love in the Time of Cholera was set here.  Colonial architecture abounds, and we spent hours just wandering the streets of the historic downtown seeking out places from the book, which both of us just finished reading. 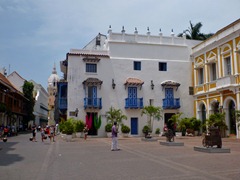 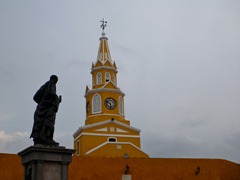 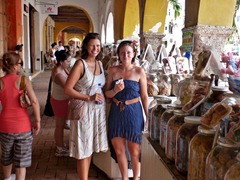 Jenn and our friend Meredith in the Gateway of the Sweets.

The Spanish established Cartagena as a gateway to the gold-rich communities of the nearby Andes.  To protect the city, the historic downtown was surrounded by several sets of walls, including a built up a reef outside the city to shipwreck marauding pirates!  Much later, Cartagena’s rich hid inside these same walls to avoid the cholera epidemic in the city. 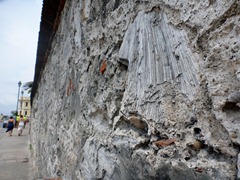 Coral was used as construction material in this city wall. 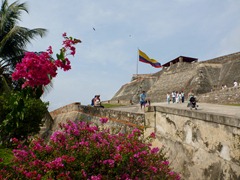 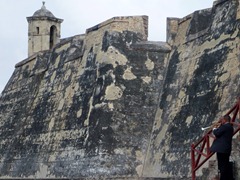 Tourist sights and sounds at the San Felipe Fort. 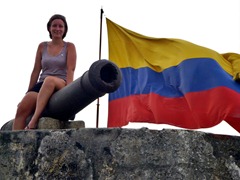 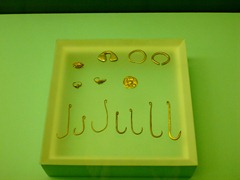 You know the area has a lot of gold when pre-Colombian inhabitants were using it to make fishhooks!

Instead of cholera, Dave’s feet have been swelling since Panama City.  This makes walking difficult, but fortunately does not impact cycling too much.  A quick internet search of swollen feet in the tropics will tell you that is a possible symptom of just about every tropical disease including malaria, dengue fever, and cholera … yikes!  Fortunately he didn’t have any other symptoms, so we decided to just wait it out.  This gave us lots of time to enjoy the food, sights, and parties with new friends from our boat trip. 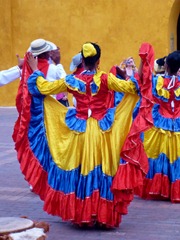 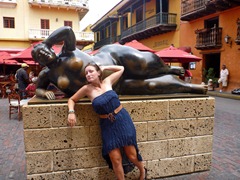 Colombian artist Fernando Botero Angulo is famous for fat naked statues like this one. 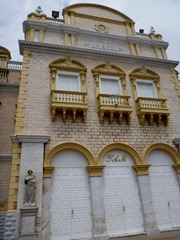 One of the cities most elegant buildings. 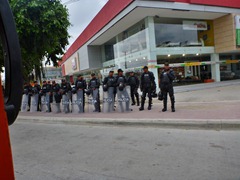 Police were everywhere in preparation for the Summit of the Americas.

Finally we said goodbye to Cartagena and our new friends to start the ride to Medellin.  The first few days crossed rolling farmland and small villages.  Each day Dave’s foot improved a little until it was almost completely better. 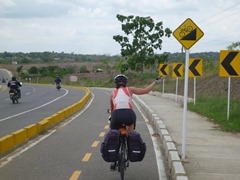 Cycling is one of Colombia’s most popular sports, and their national team is one of the best in the world.  We get cheered on a lot while riding, and most cities have some cycling infrastructure.

Healed foot and all, we’re about to get our first taste of the Andes on the way to Medellin.  This is scary and exciting for us, as we dread the long, steep climbs, yet look forward to cooler temperatures.