Colombia: Take My Breath Away

There is a warning in our Lonely Planet guide for Colombia that says “Spend some real time here, both on and off the gringo trail and there’s a danger you might evangelize like this (about Colombia) one day too.”  Also the new tourism Colombia slogan states: “The only risk is wanting to stay.”  They couldn’t be more correct.  After almost three weeks here, the stunning beauty of the terrain, the people and their personalities has left us speechless. 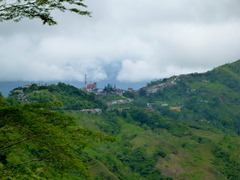 Our first taste of the Andes brought us to the ridge-top perched town of Valdivia for lunch.

Needless to say, Colombians know life the hard way.  After leaving Cartagena and the surrounding lowlands behind us we began a relentless climb into the lush jungle of the Andes.  The road was so steep at times.  We ended up having to push the bikes for 6km at the end of the above pictured day.  The whole way we were passing shacks built by the poor in these harsh conditions.  A highway for their front yard and a 1000’ drop-off the the valley below for their backyard. 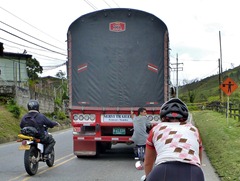 A common site and the way most locals get around; a combination of bicycle and grabbing on to the back of slow-moving trucks.  If only I possessed such skills!

Another fact of Colombian life is civil war and narco-gang violence.  Since the mid-90’s much has been done to abate these problems.  As a result we pass through multiple police and military checkpoints everyday.  Until one day we were actually stopped.  I could tell Dave was visibly nervous.  My breath was caught in my throat as I thought “Oh no, it’s actually happening.”  After some friendly and very informal chat the soldier asked his partners across the street if they were done.  That’s when we noticed they were all taking our photo!  They sheepishly put their phones and cameras away, wished us happy travels and we were on our way. 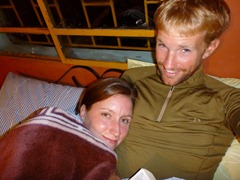 Safely tucked in at one of the highest elevations of the trip so far (roughly 2800m) and needing all the blankets provided; what a drastic change in climate after only a day. Green pastures high in the Andes.

It was another half day of climbing before we reached the high plains and the terrain turned to beautiful rolling pastures full of dairy cows.  After another night high in the mountains we had a day of massive descent.  The weather was not on our side, but that just meant more excuses to stop for delicious warm up breaks like this one. 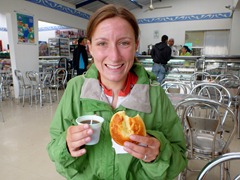 Mmm tinto (black Colombian coffee) and pandequeso (cheese bread).  I need to mention how fresh and delicious the cheese is on account of the area being surrounded by cows.

The descent brought us to Medellin.  The second largest city in Colombia and once known as the most violent city in the world and the home of Pablo Escobar, the head of the Medellin cartel.  Now a bustling, bright and clean urban centre boasting Colombia’s only Metro system, Medellin was a cultural treat.  We spent almost a week here taking in the sights, sounds and food! 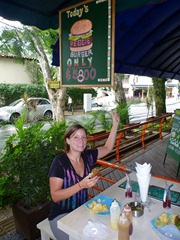 Lentil burgers!  A welcome treat from the standard set lunches. 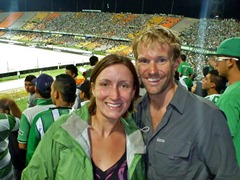 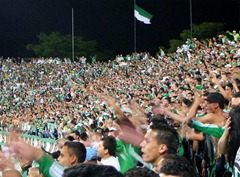 Whenever the home team scored the entire mob surged forward resulting in somewhat of a dogpile on top of the poor unsuspecting gringos.  Dave’s face was stepped on and I escaped with a huge thigh bruise but otherwise smiling.  Thankfully we (a group of eight from our hostel) had two impromptu local guides with us.  They helped us outside to purchase legitimate tickets, navigated us in via the correct line to a good viewing area and tried to warn us of the impending mayhem.  I was glad Nacional won with only a score of 1-0.  Afterwards they helped us get taxis and wished us a good night.  The friendly helpfulness of these people never ceases to amaze us! 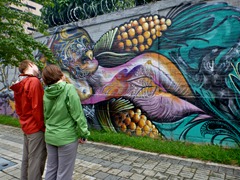 Getting a different take on the street art. 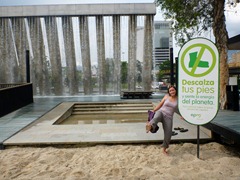 Green spaces galore to just kick off your shoes and relax.  It’s even encouraged in this barefoot park.

While here we even had the opportunity to get together with family of our friend from Vancouver, Chris.  We met his cousins for an all Paisa (person from this area) dinner of fancy arepas. 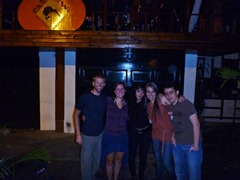 Dave, Jenn, Paulina, Blanca and Daniel.  Thanks for the wonderful night!

Our plans to leave the next morning were foiled when they mentioned several more things we needed to do before we could leave Medellin saying we fully experienced it.  These included: ride the metrocable (a ski lift part of the local transit used to reach the poorer barrios), consume a bandeja paisa (local lunch heart attack on a plate), consume a special sweet arepa made of chocolo and share in some shots of aquardiente. 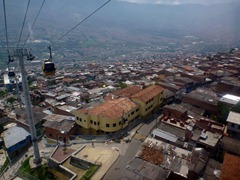 Riding the metrocable.  In Vancouver these would be million dollar homes with a view.  Here, the poor live halfway up the mountain because they have no other choice.

At the very top is the beautiful Arví Ecotourism Park.  We took a tour with a local guide and also met a fantastic set of brothers and their mother from Columbia who immigrated to the USA 25 years ago.  They were the perfect folks to take us through the rest of our to-do list (mostly requiring food consumption) and we shared a lovely afternoon with new found friends. 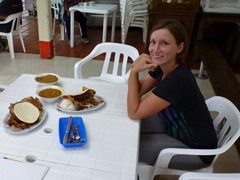 Eagerly anticipating my first bandeja paisa after a shot of aguardiente.

The next morning we said good-bye to the city and hello again to the mountains and the coffee highway.

Medellin spread out in the valley below.