Merry Christmas from the colonial city of San Cristobal de las Casas!  Since our last update we have travelled through two very different regions of Mexico: the coastal plains of the Yucatan, and the mountains of Chiapas.

Our trip through the rest of the Yucatan was quite interesting.  We followed Mexico’s Gulf Coast through the cities of Merida, Campeche, Ciudad del Carmen, Villahermosa, and Cardenas before heading inland.

Colonial streets in Campeche.  The city center is enclosed by a big stone wall which was used to defend against pirate attacks in the 1600s. 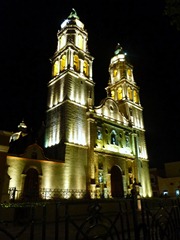 The main square in Campeche.  Every night there was music or performances on a big stage.

The beaches along the Gulf of Mexico aren’t as famous as the Caribbean but still make for good swimming. 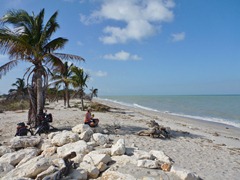 Rehydrating with coconut milk during a break.  Eat your heart out Madonna! 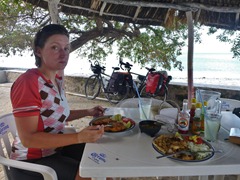 Eating fresh tilapia from a beachside family restaurant.  About $4 each per plate! 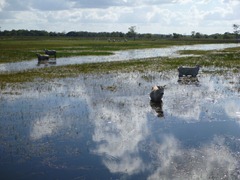 The Gulf Coast consists mainly of swamp once you get inland. But that doesn’t stop ranchers from grazing their cattle.

Deviating from our original plan of spending Christmas on the beaches of the Pacific Coast, we decided to ride through the highlands of Chiapas and Guatemala (what were we thinking?). This is significantly more difficult, and hopefully much more rewarding. Right now we are relaxing in the colonial town of San Cristobal de las Casas. It was made famous in 1994 when a revolutionary group called the Zapatistas briefly seized control of the city to protest NAFTA. Now things are safe, and it’s a culturally rich destination for Mexican and foreign tourists. 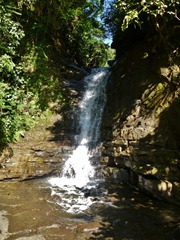 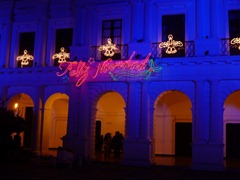 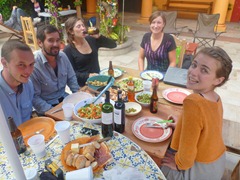 We have been learning more and more about Mayan history as we continue deeper into their traditional territory.  The mountains of Chiapas are full of little Mayan villages built right on the hillsides.  These are some of the poorest and most exploited people in Mexico.  It makes us appreciate how lucky we are to be cycling uphill when we pass a guy carrying a 100lb bag of rice up a 45 degree incline with only a strap around his forehead! 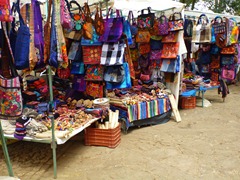 Handmade bags in the market in San Cristobal.  Lots of them still have grass spun into the wool! 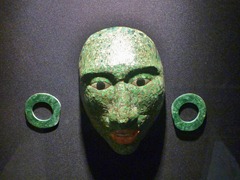 From here we carry on through the mountains to Guatemala.  We hope to reach San Pedro on Lake Atitlan before New Years.  After the celebration it’s down to business as we start six weeks of Spanish lessons on Jan 2nd.  Happy Holidays!