Holy cow, we’re in Mexico.  After about 6600km of riding from Vancouver, BC to New Orleans, LA, we’ve finally made the jump to the Yucatan in Mexico.

It’s been a huge shock to instantly transition from a familiar routine to being completely out of our comfort zone in some of the big towns.  But we’re getting better, trying to look less like gringos, and starting to soak in some of the culture.  Here are three of our favourite things the Yucatan has to offer:

Caribbean Beaches: We spent a few days lazing on beaches in Playa del Carmen and Tulum.  In Tulum we camped right on the beach for two nights! 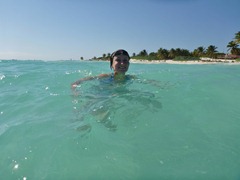 First taste of the Caribbean 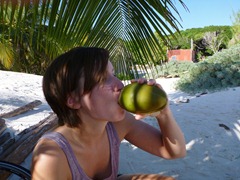 This coconut fell on our bikes in the middle of the night … so we had coconut milk with breakfast! 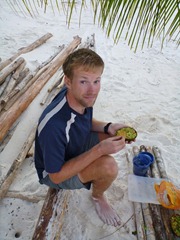 Fulfilling Jenn’s dream of making guacamole from a giant avocado and serving it in the shell.

Mayan Ruins: These are spread over the Yucatan. So far we’ve been to the ruins at Tulum, Coba, and the famous Chichen Itza. 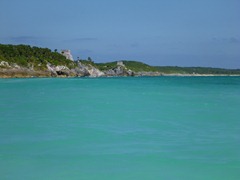 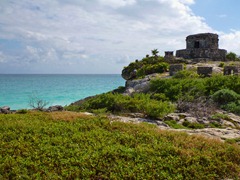 Tulum would have been a good place to be a Mayan! 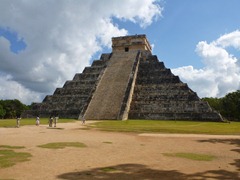 The famous El Castillo at Chichen Itza … almost with no tourists in the photo ;)

Cenotes: The Yucatan doesn’t have any groundwater. But limestone sink holes called cenotes provided Mayans with year round drinking water … and they make great swimming! 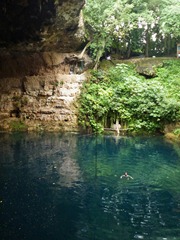 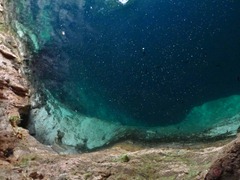 Looking down into the Zaci Cenote in Valladolid.  Some of the fish which live in these don’t have any eyes because they spend their entire lives underground!

So how did we get here? Our plans of taking a cruise ship from New Orleans, LA to Progreso or Cozumel, MX fell through, so we had to resort to an airplane. I didn’t know a bike on a cruise ship could be a threat to US Homeland Security, did you? The main cruise ship operator out of New Orleans wouldn’t make any exceptions about carrying a bicycle in any form, even disassembled. 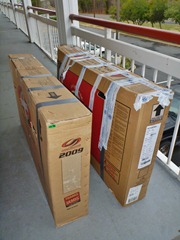 Which of these bikes has been inspected and repacked by the TSA?  Unfortunately, they didn’t repack the bike properly, so we ended up with a few damaged parts on Jenn’s bicycle and our gear.  Jenn’s bike was actually selected for three random searches during our flight!  Fortunately they failed to find our stove (not allowed on airplanes) which was packed right on top!

We have heard all sorts of horror stories about traffic on the roads in Mexico.  But so far it’s been pretty good outside of the cities.  Actually, it’s been less dangerous than many parts of the US.  That’s because drivers in Mexico actually pay attention to what they’re doing … driving!  To top it off, most places have had 3m shoulders.  Surely it can’t be this good all the way through Mexico … or can it?