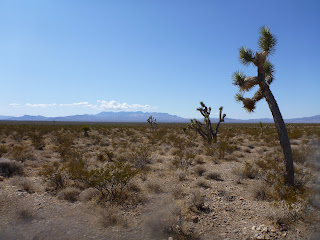 Our last post left off just as we entered Nevada. Since then we have been mostly in the Nevada and Arizona desert. It's an area of extreme temperatures, hot during the day and cold at night. We've noticed a number of other opposite extremes along the way. Here are three of our favourites:
1. Churches and Brothels
While waiting out some strong winds in Pahrump, NV we spent a few hours in a McDonalds sipping on a soft drink and finding a place to stay for the night. During this time we met two very interesting people. One was a nice man from Louisiana with a neat accent and very right wing views of the world (he got a little racist after a while). And the second was a local prostitute. We were very surprised to learn that prostitution is legal in this particular county! In fact there were brothels right in town! Perhaps to compensate for this, there are also churches everywhere...
2. Las Vegas and Red Rocks
Our next stop was Red Rocks, just outside of Las Vegas, where we spent 8 days climbing with our friends Maria, Chris, Ivan, and Mike. Maria was kind enough to bring our climbing gear down with her, so we had everything necessary to climb and explore.
Red Rocks is this beautiful collection of canyons only 10 miles from the Las Vegas strip. After a few days of climbing and living in the desert it was quite a shock to see the lights and hear the sounds of the strip. It's common to mistake the glow of the strip for the sunset ... until you realize that sunset was an hour ago and the glow is coming from the East! 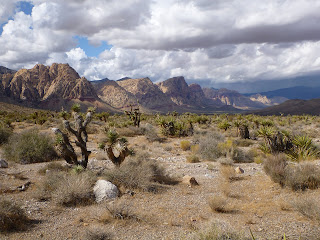 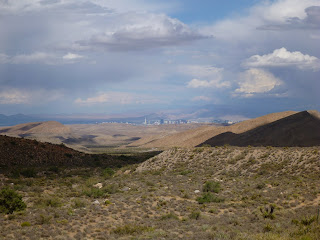 Look to the East ... Las Vegas 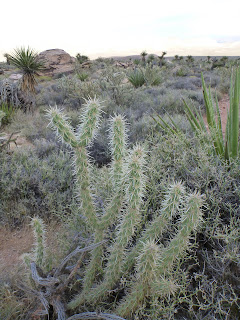 And look out for these when walking!
Most everyone was interested in sport climbing, so we spent most of the time doing that. It was great to get back in climbing shape and climb lots of new routes. 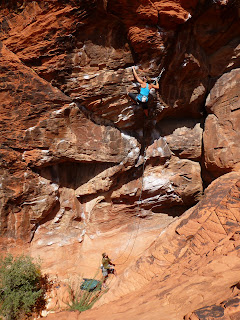 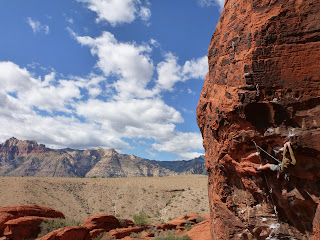 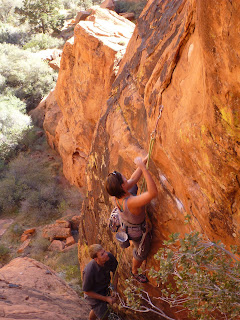 Jenn on "Long Walk on a Short Pier" 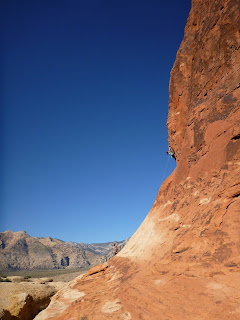 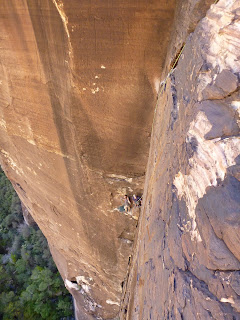 We did get to climb some longer routes too. Jenn and Chris at a belay on "Dark Shadows". 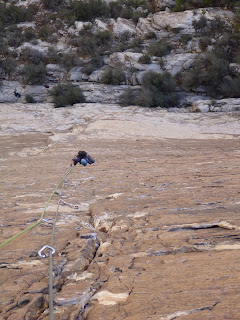 Jenn on our favourite route of the trip, the spectacularly sustained "Prince of Darkness".
3. Bullheads and New Friends
After Las Vegas we crossed the Hoover Dam and rode to Kingman, AZ. From there we were able to "get our kicks" on the largest remaining section of Route 66. 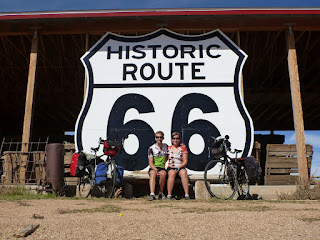 The thrill of the open road. 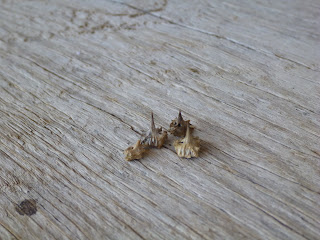 After taking the previous picture we discovered "bullheads". Wheeling our bikes approximately 20 feet through a gravel lot resulted in 16 separate punctures in our tires! Yep, 16 ... four tires out of four flat :(
However, a few miles down the road we were invited to stay with Stanley and Amy and their two kids. They were spectacular hosts and were very generous to take us as strangers into their home. We were able to eat a fabulous dinner, learn about the Hualapai Native Americans, sleep in a comfy home, and spend four hours outside their house fixing flat tires caused by bullheads.
Now we're comfy at our friends John and Vicki's in Flagstaff, AZ. More to come!
Publicado por David Brayden en 8:58 PM

Email ThisBlogThis!Share to TwitterShare to FacebookShare to Pinterest
Etiquetas: Nevada to New Mexico, South, US