Changing of the Seasons

If you think of Arizona, what comes to mind?  Heat?  Desert?  Cacti?  The Phoenix Suns?

We had similar expectations of Arizona and were expecting lots of hot desert riding.  But as we climbed on Route 66 towards Flagstaff we were surprised to see forests and grassland.  The leaves were changing colour and the night time temperature was dropping below zero.  It was the first sign of fall that we’ve seen so far.

We ended up staying with our friends John and Vicki in Flagstaff longer than originally planned, enjoying the surroundings and catching up on rest.  Flagstaff is a small university town up in the mountains and has an exciting feel.

John and Vicki were wonderful hosts (as always) and we had a great time with them.  The best part was that Vicki loves to cook … and we love to eat!

Our first stop was the Grand Canyon.  We decided to go for a day hike with John, so we headed about halfway from the rim to the river.  Both Jenn and I were blown away with the scenery.  It’s so much larger and prettier than either of us could have imagined. 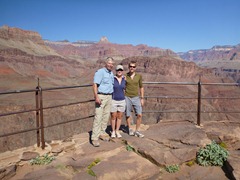 John and us at Plateau Point 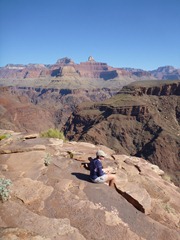 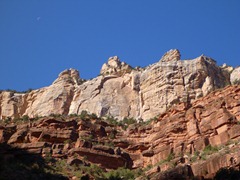 The Grand Canyon is so interesting due to the different bands of rock as you descend.  This photo shows just two of the top ones.

We were also able to rent a crash pad and head to nearby Priest Draw.  For the climbers out there, this area is full of pocketed limestone roofs, and I think it became famous after Chris Sharma visited while filming Rampage. 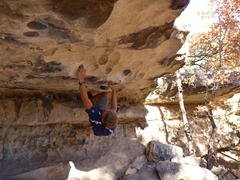 Steep climbing on pockets through giant roofs on The Egyptian boulder 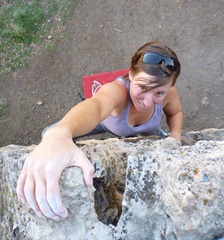 Jenn hitting the lip at The Island

John and Vicki also took us on a bike ride to nearby Walnut Canyon, where natives lived in cave dwellings around 1100AD.  It was pretty neat to see the communities of caves in the canyon. 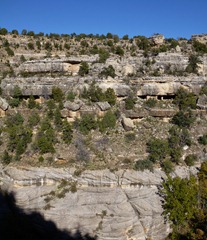 Looking across Walnut Canyon at some of the cave dwellings 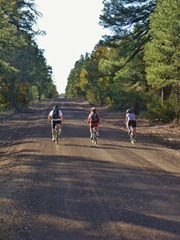 John, Vicki, and Jenn riding back from Walnut Canyon

Sadly, we eventually had to leave Flagstaff and drop back down into the Arizona desert.  Now we are just outside Globe, Arizona heading towards New Mexico. 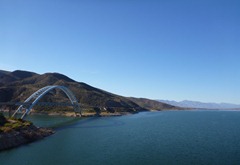 Jenn has just overcome a mild case of Giardia, and we are back to feeling great!  However, the heat, wind and hills here make for very difficult riding.  We’re both looking forward to summiting our last 8000 foot pass for a few countries and coasting down into Texas ;)

Email ThisBlogThis!Share to TwitterShare to FacebookShare to Pinterest
Etiquetas: Nevada to New Mexico, South, US