Our route from Trujillo took us on an adventure back up into the mountains towards Huaraz.  After a short section on the highway, we followed the Rio Santa for about 200km from the desert right up into the Andes.  About 130km was unpaved and the road ranged from smooth and easy to rocky and horrible.  We spent four days riding through beautiful canyons and little villages with barely any traffic. 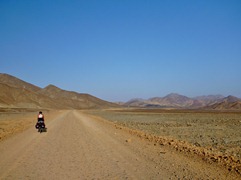 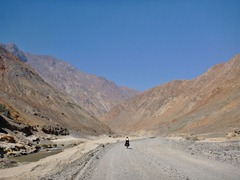 Riding towards the mountains along pretty roads. 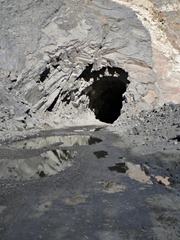 At times the road was really bad and going was slow (we came through that hole).  One day we averaged less than 10km/hr! 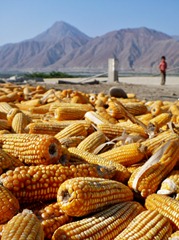 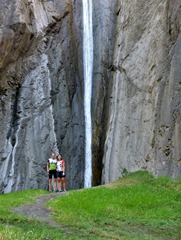 Some of the scenery: drying corn and a roadside waterfall. 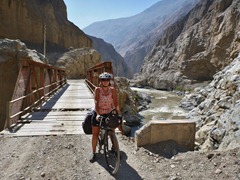 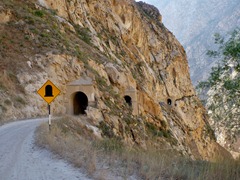 The road through Canon del Pato (Duck Canyon) contains 37 tunnels in 10km and is built right along the side of a cliff. 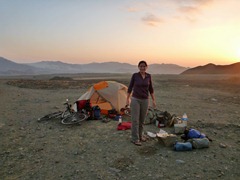 Every night we seemed to find a wonderful camping spot. 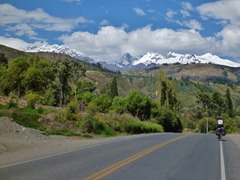 Beautiful roads with views of the Cordillera Blanca.  There was no traffic on this section because of roadblocks to protest pollution in the Rio Santa due to a Canadian mine.

Huaraz is a well known climbing, hiking, and mountaineering destination, located at the base of the famous Cordillera Blanca (White Range).  This mountain range is known as the second highest in the world (next to the Himalayas) and contains the famous peaks Alpamayo (which everyone refers to as the most beautiful mountain in the world) and Artesonraju (the mountain from the Paramount pictures logo).  Just South lies the Cordillera Huayhuash, which is known for hard, technical, and remote mountaineering and was made famous as the scene of Joe Simpson’s Touching the Void. 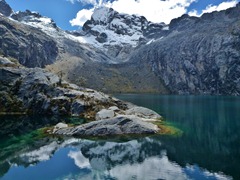 Laguna Churup in the Cordillera Blanca on a day hike.

In Huaraz we met up with friends from home.  Maria and her dad Val are here on a mountaineering trip.  We joined them for their five day acclimatization hike in the Cordillera Huayhuash.  Normally hikes here take between 10 and 15 days, but we opted for a shorter circuit which included an ascent of Diablo Mudo (5350m).  Val and Maria had arranged a guide, including donkeys, a cook, and a donkey driver, so we just had to focus on plodding along at the high altitude. 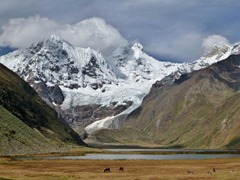 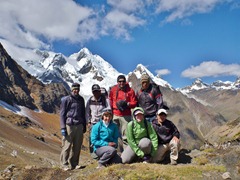 Us with our wonderful guides. 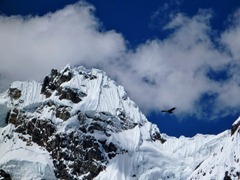 We must have seen 30 of the majestic Andean Condors.

Our camp the night before climbing Diablo Mudo. 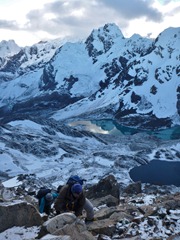 Val and Maria climbing a rocky section on the way up Diablo Mudo. 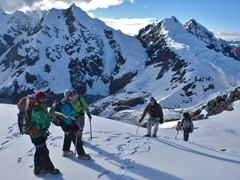 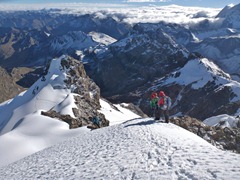 On the summit (5350m) and just starting the descent. 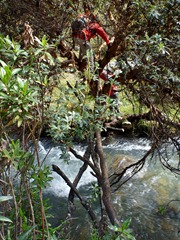 Looking back from Pampa-Llamac, our last pass of the hike.

Reuniting with friends, the beautiful roads, mountains, hiking, camping, and lack of traffic have made this one of the favourite legs of our trip.  From here we head back down to the coast and the capital city of Lima.