Since our last update, we’ve travelled through some of Ecuador’s mountain cities.  As usual, the scenery and the people have been wonderful, but unfortunately it’s been a difficult week for us due to problems with our bikes and with our bodies. 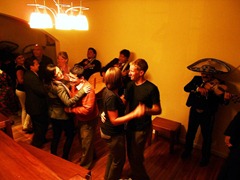 In Quito we had the chance to stay at one of the best hostels of the trip so far: Community Hostel.  Among other things, there was dancing in the dining room with a Mariachi Band for Marco, the owner’s, birthday!  (Thanks to Alex for the photo)

Quito is a colossal city crunched into a hanging valley over 50km long and only a few kilometers wide.  This is the view South to the Virgen of Quito from the Basilica.

In contrast, Quito is surrounded by wild mountains.  Hiking up Rucu Pichincha (4700m) from the top of Quito’s TeleferiQo (cable car). 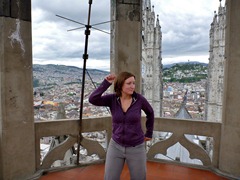 Busting out at the top of the Basilica to the sounds of music far below.

Originally we planned on spending just two days in Quito.  But on day two we decided to get Jenn’s bottom bracket replaced before heading out.  It had been making a steadily worsening sound for the last few months of the trip.  And then on day three both of us ended up with stomach problems.  All in all we stayed for six days of bike and body maintenance. 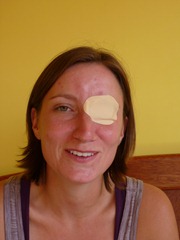 Jenn paying a visit to the eye doctor on day five to have a piece of foreign matter removed from her cornea … yikes!

From Quito we made our way South over the two highest passes of the trip so far.  This is the end of rainy season in the mountains here and the weather wasn’t cooperating.  So instead of the breathtaking views we were hoping for, we had to settle for getting soaked in the fog. 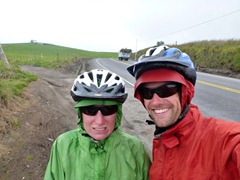 After descending slightly from riding through sleet in a 3600m pass before Riobamba.  There was a miscommunication about whether we would smile for the picture or show how we really felt ;) 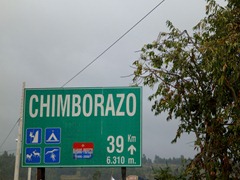 Volcano Chimborazo is famous for being the furthest point from the centre of the Earth (due to the Equatorial Bulge).  Unfortunately this is all we saw.

Between Riobamba and Cuenca, Dave became sick on the side of the road.  For the first time, we decided to finish the trip to Cuenca by bus for more body maintenance time. 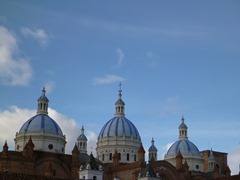 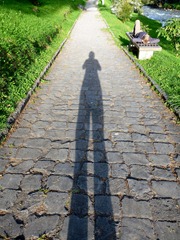 Relaxing by the river in Cuenca. 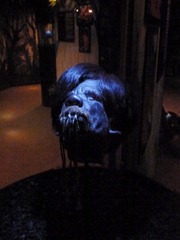 Some of the tribes in Ecuador are famous for punishing thieves or murderers by using them to make shrunken heads like this one!

Perhaps out of sympathy, our bikes had a few more things rattle loose. A screw rattled out of Jenn’s rack, and both of our cycling computers stopped working. 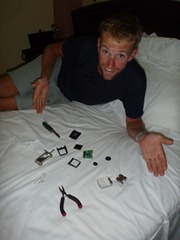 Good thing we have an Avionics Technician and an Electrical Engineer along! 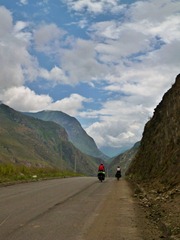 From Cuenca the road plummeted to the coast.  Jenn and German cyclist Andre soaking up the downhill.

Now that us and our bikes are all rested, recovered, maintained, and tightened, we’re excited to spend the next week taking in the sun and waves of the Pacific in Northern Peru.