You Get What You Put In

As in most things in life, this is definitely true in cycle touring.  It’s easy to take the biggest, fastest road and speed through to your next destination.  Or you can spend more time and effort, and take a longer route, linking the places you want to see.  This sentiment has certainly been true in the last two countries we have travelled through: Honduras and Nicaragua.

Honduras is known to tourists for spectacular Caribbean beaches on Roatan and incredible Mayan ruins at Copan.  Unfortunately neither of these places were convenient for us, so we just rode right through along the Pacific Coast.  The road was hilly and in poor shape, with temperatures over 40C.  To top it off, all the kids screamed “GRINGO!” at the top of their lungs as we passed, even from less than 2 meters away.  Guess what … Honduras didn’t make a big impression on us. 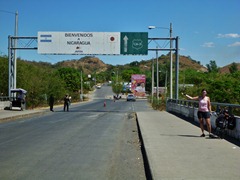 In Nicaragua we detoured slightly to visit all the places we wanted to see.  Among these are Nicaragua’s two famous colonial cities: Leon and Granada.  After independence from Spain, liberal Leon and conservative Granada vied for political power, dividing the country and leading to civil war.  As a compromise, the capital was moved from Leon to its current location in Managua.  At the time Managua was just a fishing village, and it was chosen solely for being halfway between the two rivals. 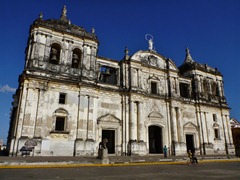 Leon’s Cathedral from the Central Park.

Leon has a young, student vibe.  The city is sprinkled with political murals including this one depicting four students being killed for protesting the Somoza family dictatorship in Nicaragua.  The Somoza’s ruled Nicaragua with US support from 1936 until 1979. 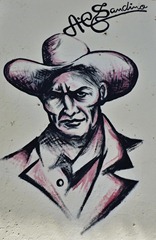 Another mural depicting Augusto Cesar Sandino, a national hero and Central American symbol for defiance of colonial powers.  Sandino spent his life opposing US intervention in Nicaragua until he was eventually assassinated by Somoza in 1934. 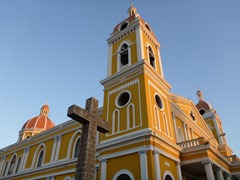 Our travels in Nicaragua also took us sandboarding on the active volcano Cerro Negro and relaxing on Ometepe Island in Lake Nicaragua.  As the biggest lake in Central America, Lake Nicaragua is responsible for much of the colonial interest in Nicaragua.  It is connected to the Caribbean side with an easily navigated river and stretches to within 20km of the Pacific Ocean! 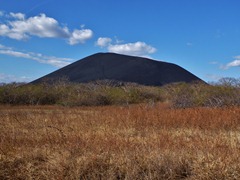 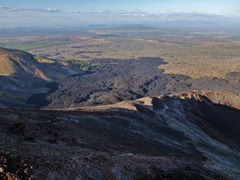 Volcano Cerro Negro, near Leon.  Lava from the last eruption in 1999 on the right. 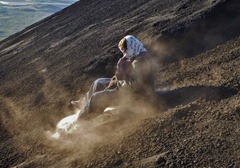 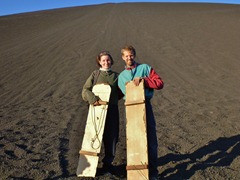 After hiking up we sandboarded down the volcano on these toboggan type things.  Great fun! 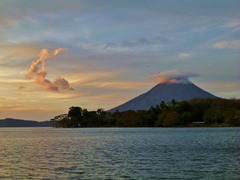 Ometepe Island is formed by two volcanoes rising from Lake Nicaragua.  Over the centuries, lava has connected the two islands. 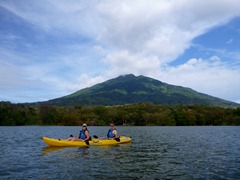 We spent two days exploring the island on our bicycles and relaxing lakeside with our friend Merideth. 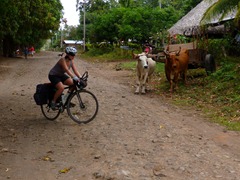 Unfortunately Ometepe was also home to some horrible roads, like this section which took us about 1 hour to travel 6km.  Clearly, oxcarts are a far better method of transport than road bikes.

After putting in the effort to see it, we loved Nicaragua.  It’s definitely a candidate for our favourite country thus far.  With natural beauty comparable to Costa Rica, lots of history, and Central American prices, it’s definitely an up and coming tourist destination.

As for us, we’re currently enjoying a visit from our parents in Playa Hermosa, Costa Rica.  Pura vida friends!