… and some parts are really remote!

Most of West Texas is composed of desert and cattle ranches.  Since the abolition of slavery, much of the rural Texas economy has shifted from growing cotton to cattle ranching. 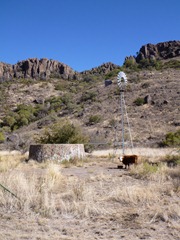 A cow, and wind powered well near Fort Davis, TX. This day we rode 70 miles without passing any civilization or services. 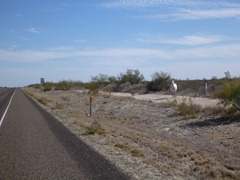 Well hello, how did you get out?

Thankfully food is something we take seriously, so are always very well prepared and have not had to do without while learning this.  We have bought everything from expired yogurt to energy bars (Larabars are primarily made of dates and those definitely go fuzzy).  Now of course we are much more careful. 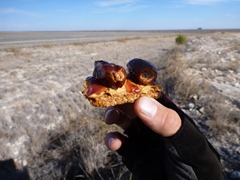 An improvised snack made of a granola bar topped with peanut butter, jam, and dates.

The rural and ranch roads across most of Texas are made of what is called “chip-seal”. Basically it’s tar with crushed gravel sprinkled on top.  A few days ago we were riding along when “BANG”, David’s tire exploded! Thankfully a passing cyclist (the first one we had seen in days, and only one going the same direction) was able to sell us his folding spare tire and the disaster was averted. 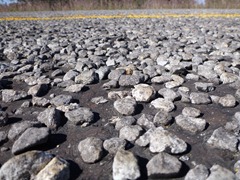 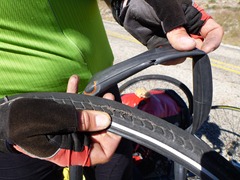 Tube and tire after the explosion. 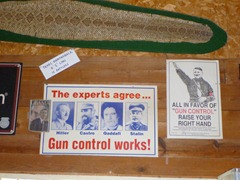 Warmshowers.org and it’s users are awesome

Warmshowers is a website where touring cyclists and people willing to host them set up profiles enabling them to learn about each other and get in contact to arrange accommodations free of charge.  We signed up at the start of our trip, but didn’t contact anyone until we reached Texas.  Since then we’ve been hosted by three wonderful people in Sanderson, Langtry, and Austin. 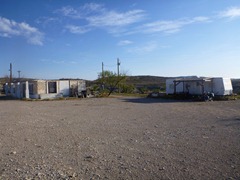 Our warmshowers accommodations in Langtry.  The trailer was luxury and stocked with food.  Keith also brought us homemade potato soup.  Langtry was the home of Judge Roy Bean, a rowdy, unconventional judge known as “The Law West of the Pecos”.  He was known for holding court in his Saloon, and shot to fame when he hosted a banned prize fight on a sandbar in the Rio Grande, just across the Mexican border.

We just had the opportunity to take a day off in Austin, the capital of Texas and where Lance Armstrong lived during all his tour victories.  Bicycles were everywhere, there was great live music, and lots of urban green space. We spent our day off swimming in a 400m long natural spring pool, eating lunch at a restaurant with a band, and biking to art galleries in people's houses as part of the East Austin Studio Tour (http://www.eastaustinstudiotour.com/) with our warmshowers host Evan and some of his friends.

We also fulfilled our US goal of attending a college football game.  We bought tickets to watch the University of Texas Longhorns take on Kansas State.  We didn’t know this originally, but the University of Texas is one of the biggest football schools in the USA.  There were 100,700 people in the stadium, including families, students, crusty old timers, and just about everyone else. 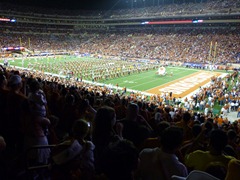 The band on the field before the game.  We were astounded as they changed shapes from the U of T logo to a longhorn bull. 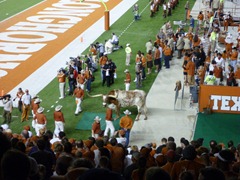 The U of T mascot Bevo stood beside the field for the entire game.  He didn’t flinch at the crowd, band, or even the cannon which they fired every time Texas scored.

Email ThisBlogThis!Share to TwitterShare to FacebookShare to Pinterest
Etiquetas: South, Texas to Louisiana, US