The 7 Cardinal Sins: How They Apply to a Touring Cyclist

The last time we left you we were happily cruising down the beautiful Oregon Coast. The southern part of the state was no less impressive. In some places it looks like the mountains have literally met with the ocean and started tumbling in to it. There are also spots where the power of the ocean has carved out magnificent features in the rocks, like Devil’s Punchbowl… 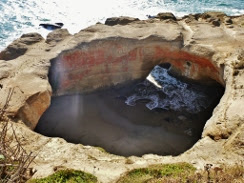 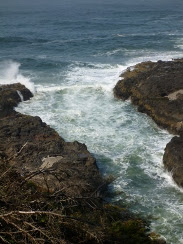 All these Devil related names (trust me there were many more) gave me the idea for this blog post, so here it is:

Traditionally it`s thought that pride is the source of most of the other deadly sins, but in the case of a touring cyclist it`s definitely gluttony. That is why I have placed it at the top.

GLUTTONY: A touring cyclist needs to eat about 5000 calories a day. That means a breakfast of cereal, yogurt and a banana. Morning recess is usually some fruit and a Clif Bar and maybe some trail mix. Lunch consists of a couple wraps and some snacks, or a cafe burger or sandwich and fries. Then there’s afternoon recess. After that we usually stop for dinner groceries and have some chocolate milk, chips, ice cream or other sugary goodness (this is like the reward for the day snack). Dinner is the same sort of thing we would eat at home, just in larger quantities and we always finish the day off with a chocolate bar dessert.

Here is a photo of a typical lunch wrap. 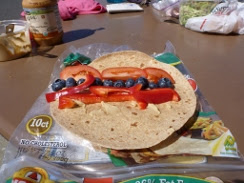 GREED: Touring cyclists are usually on a budget, so this means getting anything and everything for as cheap as possible. This is quite evident in the lengths people will go to stay in state parks, which have these great $5 hiker/biker sites. There`s also the act of stealing. Things like peanut butter, jam and honey packets are common casualties. The gluttony also plays a big role in this one. 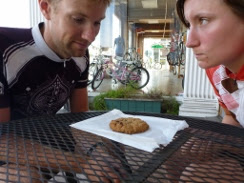 LUST: I won’t elaborate too much on this one, but we do end up staring at each others spandex-clad butts all day. 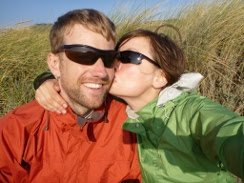 WRATH: Two words: broken spokes. For some reason these are occurring at too regular an interval for David at the moment; as in every day. This is a problem we are going to have to look in to in San Francisco. 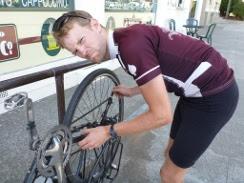 SLOTH: Although we spend about 5hrs a day pedaling our bikes, we spend the other 19, sleeping, eating and generally not doing much of anything. We usually sleep around 10hrs a day, and don`t even ask me about rest days. 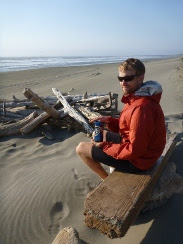 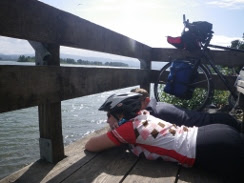 ENVY: You have no idea the torrent of jealousy that takes over when I`m struggling my way up a hill and I see an oncoming cyclist cruising their way down with a friendly smile and a wave. Today we were actually passed going uphill by a pickup carrying two bikes with panniers and blinking lights (meaning they were very recently riding). Don’t get me wrong, I was jealous, but sometimes there’s a certain amount of pride that takes over too… 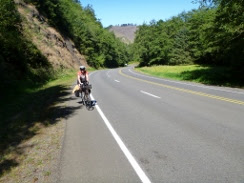 PRIDE: I`ve got to say there`s no feeling quite like it when I look at a map and see where we are and where we started and think that we made it all that way under the power of our own legs.
Publicado por DJ Brayden en 10:24 PM

Email ThisBlogThis!Share to TwitterShare to FacebookShare to Pinterest
Etiquetas: California, South, US, Washington to Oregon