Lines in the Sand

Since our last post we’ve travelled about 500km South along the coast from Lima to Nazca.  The riding wasn’t particularly difficult or inspiring, but this section was packed with interesting activities and archaeological sites.

This area of the coast attracts the majority of weekend vacationers from Lima.  In 2007 an 8.6 magnitude earthquake (the government called it 8.0 so they wouldn’t have to pay as many reparations) completely destroyed the city of Pisco and damaged many nearby.  Together these things make a very Peruvian combination of rich resorts amidst extreme poverty.

Our first stop was the seaside resort of Paracas.  From here we took a two hour boat tour to see the areas sights. 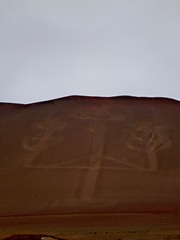 The Paracas culture created this giant “chandelier” (more likely a cactus), which can only be seen from the ocean, around 2000 years ago.  The lines are created by removing the darker surface rocks to reveal the lighter coloured sand underneath. 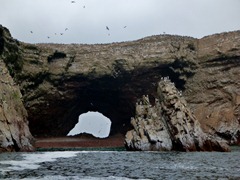 The Islas Ballestas lie off the coast of Paracas right in the cold Humboldt Current.  This time of year anchovies follow the current North and the islands become home to all kinds of birds which come here to feed.  The birds guano (poo) is one of the world’s best fertilizers.  Here it is harvested every 10-30 years when it gets to be more than 50cm thick! 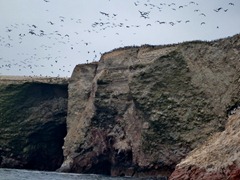 The area was packed with wildlife.  We saw pelicans, Inca terns, Peruvian boobies, sealions, and … 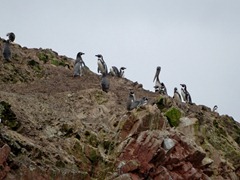 From Paracas we headed to the former Peruvian resort town turned gringo town of Huacachina.  Some of our friends said it best when they called it a giant sandbox for grownups. 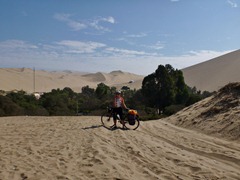 Jenn and the oasis of Huacachina.  Despite the lack of photo evidence, we are still getting around by bicycle ;) 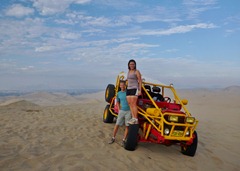 The best, and most fun, way to see the dunes of Huacachina is by dune buggy. 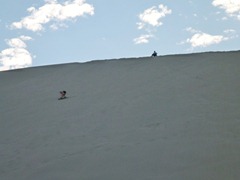 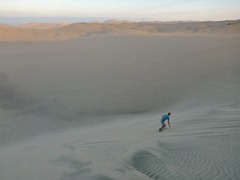 Making our own lines sandboarding down the dunes. 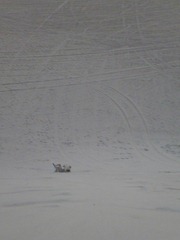 Our next stop was a bit of a milestone for us.  Since the start of our trip we’ve been dreaming about visiting the famous Nazca Lines.  There are thousands of geometric designs and over 300 pictographs in the desert here that were created between 600BC and 400AD. 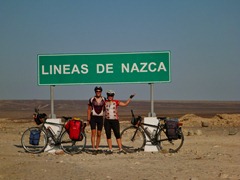 After 10 months we made it!

Like the chandelier of Paracas, the lines are created by removing the darker surface rocks, and are preserved by the lack of rain and wind.  The pictures are several hundred metres wide and the designs can be up to tens of kilometers long.  This means that the designs are so big that they can only be seen properly from the air!  To get the full experience we took a short and bumpy tourist flight to see the area. Hungry for more information we then attended a lecture on the lines at the local planetarium. 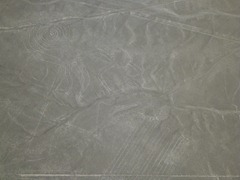 Definitely the most famous picture, the monkey (top right). The spiral tail is somewhat of a national symbol of Peru. In this dry area, the monkey symbolized water. 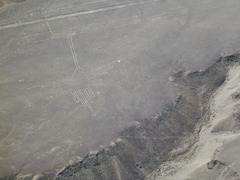 Another of our favourites, the hummingbird. 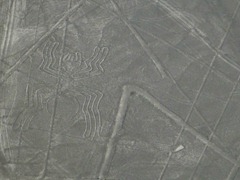 Even today their purpose remains a mystery.  Theories abound, including that the figures formed a giant airport for extraterrestrials!  The two most widely accepted theories are that they were used for religious ceremonies related to water or that they formed a gigantic astronomical map, pointing out solstices and locations of constellations during different important celestial events.  These theories aren’t mutually exclusive, and it’s likely that they are both partly true.  The astronomical theory would make the Nazca culture one of the most advanced of its time. 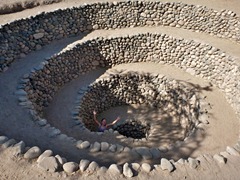 We also visited some Nazca aqueducts (there’s flowing water at the bottom).  The Nazca were smart enough to dig deep down to the water table to find underground streams.  Note the spiral design, similar to the monkey’s tail.

From Nazca we ride up into the mountains towards Cuzco and our next milestone destination of Machu Pichu.  The ride starts with a 4000m climb from Nazca, wish us luck!