The modern, flamboyant flag of the Inca.

South America’s most famous site, Machu Picchu, is a little bit isolated in that it can not be accessed by road.  This leaves a number of options, including a train trip, the famous Inca Trail, or a bus and walk combination.  For our journey we decided to leave the bikes in Cusco and do an organized five day hike called the Salkantay Trek. 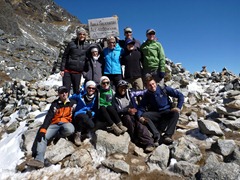 We couldn’t have asked for a better group during the hike – Team Apacattack! 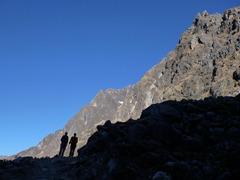 The hike took us up, up, up through the forest, pampa, and into the alpine …

… through a high pass between Salkantay
and Humantay mountains … 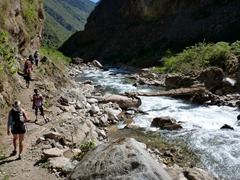 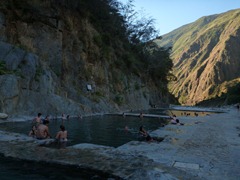 … past some beautiful hot springs … 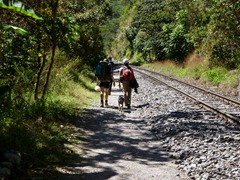 … and along the railway tracks to Aguas
Calientes, the town at the base of Machu Picchu.

Machu Picchu was considered a holy place during the time of the Incas.  Many important families would make the pilgrimage here from across the Inca Empire to celebrate important events.  When the Spanish arrived Machu Picchu was abandoned, and it sat forgotten and untouched for almost 400 years until it was rediscovered and unearthed in 1911.  Since then it has deservedly developed a reputation as one of the most stunning archaeological sites in the world. 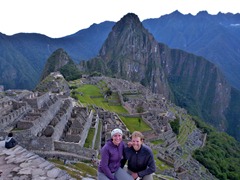 We can’t believe that we’re finally here.  Waiting for the sun to rise and our tour to begin. 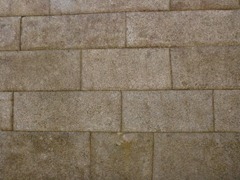 The mortarless Inca stonework has survived many large earthquakes where more modern buildings have fallen.

Machu Picchu was not a fortress, but a religious place.  The Inca worshipped the natural world: the sun, the moon, the mountains, the sky, and there are many temples dedicated to this.  These temples have remained intact since Machu Picchu was not discovered by the Spanish, unlike others which were smashed to make room for Christianity. 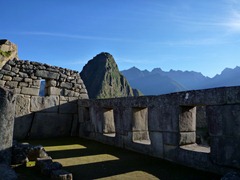 The Temple of the Three Windows. 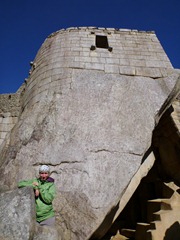 Jenn and the Temple of the Sun.

But along with war, the Spanish brought new technologies and ideas to South America. It would be a mistake to think of the Inca as an innocent society that was destroyed by the Spanish. They definitely did not build their empire on friendship and peaceful alliances, and we visited sites from several other cultures in Peru who were decimated during their expansion (such as Chan Chan in Trujillo). But taking in the ruins one can’t help but wonder what the world could have been like. 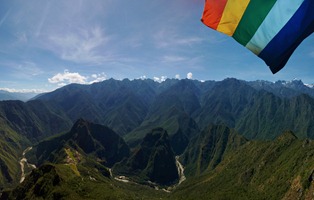 The view down from the summit of Machu Picchu Mountain to the site shows how incredibly perched Machu Picchu is, surrounded by sharp peaks and encircled by the river. 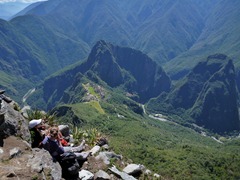 Jenn and Shalila relaxing and taking in the view. 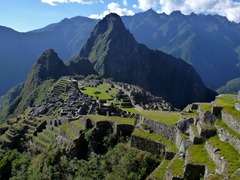 Terraces and the main site in all their afternoon glory.

We spent almost 10 hours at the site marvelling at the stonework, the position, and the incredible views. Without a doubt, this is one of most spectacular and awe-inspiring places that either of us have ever seen.