The route you ride has an enormous impact on the enjoyment of a cycle tour.  And there’s always a compromise involved.  Do we skip this to see that?  Take the more beautiful but also more difficult route?  Ride in the mountains or along the coast?

After our time in Huaraz we had another decision to make.  Do we stay in the mountains or head back down to the coast?  The mountains and the coast in Peru couldn’t be more different.  The mountains are peaceful, remote, and slow and the coast is bustling, busy, and quick.  In the end we chose the coastal route to visit some of the archaeological sites that we’d heard so much about. 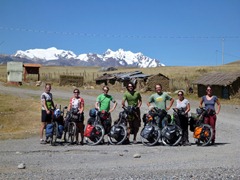 Just outside Huaraz we ran into two friends from Trujillo who were riding with three other cyclists they met.  With them we rode as a party of seven for a couple hours, making a large pack that no dog would dare chase.  They turned off shortly after for the mountain route and we almost changed our minds right then and there to join them. 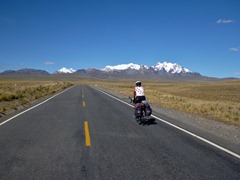 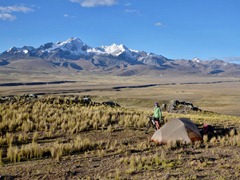 Back by ourselves riding through the pampa at 4000m. 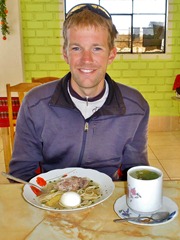 Combating the cold and the altitude as the locals do with caldo de gallina (turkey soup) and mate de coca (coca tea).

After our highest pass of the trip (4080m) we dropped all the way down to the coast.  It was a fast descent filled with switchbacks and barking dogs. 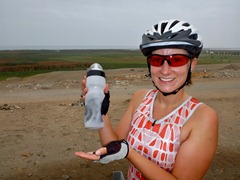 What happens to your water bottle after you drop 4000m.

The most unfortunate feature of riding on the coast are the busy and bustling cities.  And now we were riding into the biggest city of our trip: Lima.  We had heard horror stories about the traffic and poverty on the outskirts of the city and were very worried about entering it by bicycle.  The city started about 40km outside of the centre and we dodged and leapfrogged buses the whole way in without too much difficulty or any shady situations. 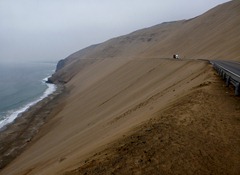 Looking back on a pretty coastal road just outside of Lima.

We spent a few days relaxing in the ritzy neighbourhood of Miraflores, which reminded us of downtown Vancouver.  This was comforting in a way and we spent the majority of our time baking in the oven and stocking up on gear we will need for areas ahead. 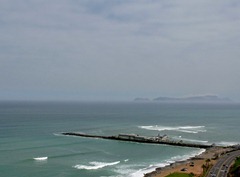 Looking down on the beach in front of Miraflores.  There is surfing to be had here all year round. 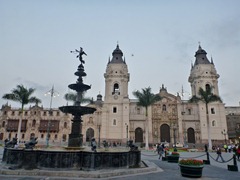 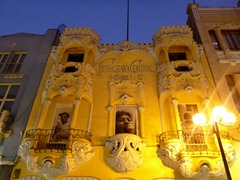 And now we’re considering one more choice.  Do we end as originally planned in Buenos Aires or do we continue the ride through Patagonia all the way to the very Southern tip of South America.  We originally planned not to take the longer and more difficult route, but the more we talk about it the more we’re looking forward to it.  And how could we stop riding when we’re having so much fun? ;)