Since our last post, we’ve been back on the bikes working out the kinks from six weeks of inactivity.  Things are feeling a little rusty for both of us and we had two very avoidable crashes in the first two days!  One was caused by the ever frequent distraction of cows on the roadside.  Hopefully we’ll be quick to get back in the swing of things. 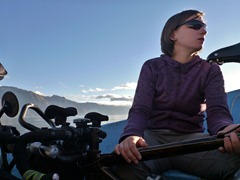 Jenn and her bike crammed in the boat across Lago Atitlan. 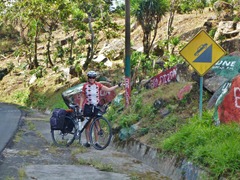 The descent from Lago Atitlan was steep and fast.  We were followed by police trucks three different times during the descent.  They claimed to be escorting us for our safety.  But the way it was carried out was a little fishy and it seemed they were in it for some other reason … 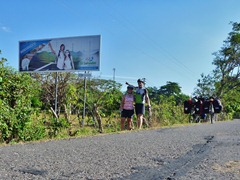 Shortly after leaving Lago Atitlan we entered wonderful El Salvador.  To most North Americans, this country is known only for violence and civil war.  But the war is long over, the economy is recovering, and El Salvador is starting to make a name for itself as a tourist destination.  Here are our top three reasons to visit El Salvador on your next vacation:

In El Salvador we have encountered some of the friendliest people of our trip so far.  We were expecting a lot of anti-North American sentiment (due to the fact that the United States gave a whopping $6 billion to and trained the unpopular Salvadoran military during the civil war) but we didn’t find a trace.  In fact, every day people wanted to talk to us about the United States and Canada.

It turns out that many Salvadorans have lived or worked in North America.  And the United States is definitely seen as the land of opportunity.  One person we met slapped his son on the back, pushing him forward and said: “Hey, you like this kid?  Take him to America!”.

Shortly after entering El Salvador we reached the Pacific Ocean for the first time since San Francisco!  We both felt a little homesick the first time we smelled the salty breeze.  This breeze was also a welcome reprieve from the 40+C temperatures in the Pacific lowlands. 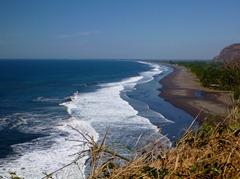 Our first view of the Pacific Coast in El Salvador.

The Pacific Coast of El Salvador has been making a name for itself as a surf destination. The breaks are beautiful, the water is warm, and renting a surfboard will only cost you $5 a day. We took some time off in El Tunco to sharpen our skills. 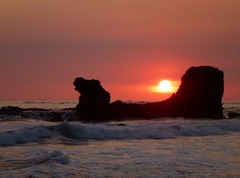 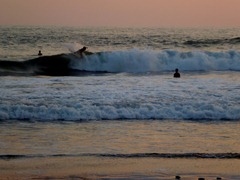 Someone much better than us surfing in El Tunco, El Salvador.

One thing that did take time to get used to is that El Salvador is still heavily militarized.  Every gas station or store sports at least one armed guard usually carrying a handgun and an impractically large shotgun or rifle for show.  And in Guatemala and Mexico people carry their machetes blade down (like your mother told you to carry scissors), but in El Salvador people carry their machetes blade in front. (like you actually carried the scissors).  This way it’s ready to trim grass, peel the kernels off a cob of corn, cut down an 18 inch diameter tree, or scare the heck out of a couple of gringos who think it’s a threatening posture. 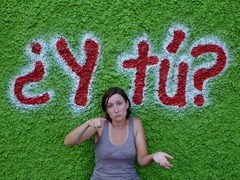 We hope everything is well.  We love reading your comments, so please keep ‘em coming!