During our six weeks learning Spanish in Guatemala, San Pedro really started to feel like home.  We had our family there, our preferred coffee (and therefore study spots), favourite foods and a routine.  All things we are going to miss, being back on the road again. 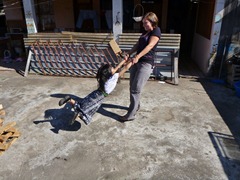 Playing “helicóptero” with Angela on the roof.  Lookout for the stray pieces of construction materials and drying firewood!

As you can see, even when playing Angela is wearing the traditional traje (suit) for the women of the local area.  The Mayan culture is still very strong in the highlands of Guatemala and I feel very privileged to have had the opportunity to experience and immerse myself in it. 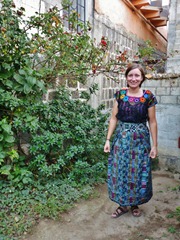 Rocking my own traje (thanks Flory!).

I was a hit in the town when I went out in this.  I received many compliments and even a marriage proposal.  Good thing I had Dave with me.

Another crucial requirement to being a Mayan woman is mastering the art of tortilla making.  In Spanish they actually have a verb “tortillar”, which means “to (make a) tortilla”. 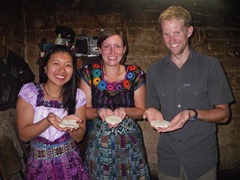 Rainbow, Dave and I learning to make tortillas that we later described as “tortillas feas” (aka. ugly tortillas). 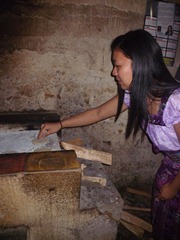 Harder still than making the perfectly shaped tortilla without dropping it is flipping it on the hot stove plate.  Notice it’s wood burning, the norm for most people here.

One thing I will definitely carry with me for a long time is the distinctive “slap, slap, slap” sound of Maria making her fresh, beautiful tortillas before every meal.  Even the masa (dough) required to make them is fresh made from dried corn every day or two.  One sound I won’t miss is the incessant hammering noise of the machines spread throughout the community that are used to mash up the corn.

Fueled up on tortillas we were ready for salsa classes!  After six weeks, guess what?  Dave actually can dance. 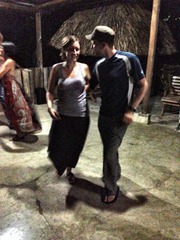 Another favourite of ours; soccer night with the school. Our skills were no where up to par with that of the teachers, who like most locals live and breath soccer.  Regardless it was definitely fun and we learned a thing or two. 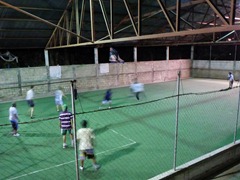 Unlike a lot of locals we had the fortunate opportunity to take a weekend and go visit the impossibly cute colonial city of Antigua. 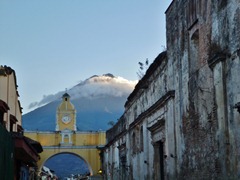 Surrounded by three volcanoes there was always a great view to be had. 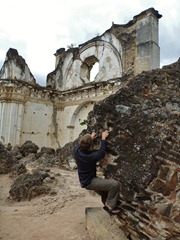 Antigua was the capital of Guatemala and much of Central America until it was destroyed by an earthquake in 1776.  Now it’s ruins make for great impromptu bouldering and incredible sightseeing.

We got to meet a lot of great people in San Pedro and two of them are Jose and his brother Henry.  They are painters who began a children’s project out of their gallery to help disadvantaged children learn to draw and paint. They give back 20% of what they sell to the project. Most of the kids come from single mother homes and some of the proceeds also go towards food, basic necessities and clothing. We bought two paintings and the one shown below was actually painted by a 16 year old student of theirs. For more information you can visit their website at :http://paintmyfuture.org/. 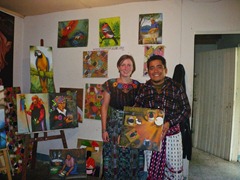 Me and Jose, who is wearing the traditional traje for men, a rare sight actually.

Most of all I will miss friends and family from San Pedro, who welcomed us with open arms and big hearts. 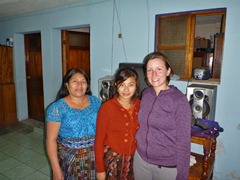 From left: Maria (our San Pedro Mom), her eldest daughter, Ana-Maria, who left for school in another city only two weeks after we arrived and myself. 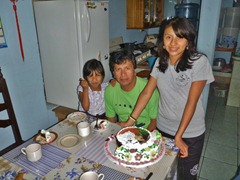 The rest of the family; Angela (Angelita), Miguel (our San Pedro Dad) and the birthday girl, Norma (who also shares a love of the Twilight Series). 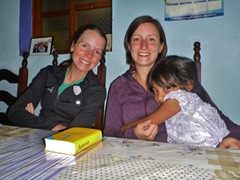 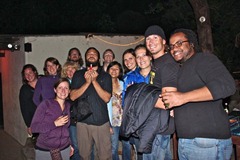 Good-bye party at El Barrio.  Thanks for the photo Carlo. 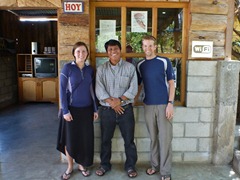 David and I with Lorenzo, the director of La Cooperativa Spanish School. 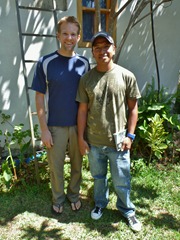 Dave and his instructor Wilson. 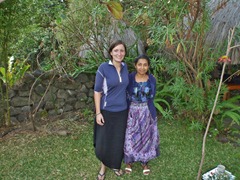 My instructor, Griselda, and I saying good-bye.

Thanks for everything San Pedro, we’ll miss you.  But, as life keeps moving forward, so must we.  Here we come Central America, armed with Spanish and open minds.