No Country for Soft Men


Our trip from Tok, AK to Dawson City, YT took us on the hilly Top of the World Highway.  The road runs up, down, and along ridge tops with over 4700m of elevation gain in less than 300 km!  The route made for a hard, but rewarding bike ride. 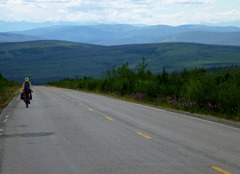 Powering through another steep hill.

Aside from the name, the road is actually quite old.  It follows many of the original trails used by prospectors before and during the gold rush.  There was the gruelling trail from Dawson City to 60 Mile, the 425 mile trail from Valdez to Eagle (downstream from Dawson), and trails from Dawson to the town of 40 Mile.

“A forty mile walk over a rough wintry trail, in forty below zero weather, with a forty-pound pack on his back, left the prospector without poetry in his soul, but with a keen appreciation of the distance travelled…”

Reading the stories of early journeys through this area made us think, “Man, these were hard people.”  Does adventure like this even exist anymore?  Their stories made climbing steep hills on the bicycles seem like a stroll in the park.  This post includes anecdotes about some of the people and places we learned about in the region and some of the these old routes.

The present road follows much of the old Valdez-Eagle trail.  This trail was the main link on the Alaskan side to the Yukon river.  Mail was delivered every two weeks, summer and winter, over the 425 mile trail via horse or dogsled by some hearty postmen.

“One December the mail carrier arrived in Eagle almost two weeks late.  He had lost all of his horses and had to walk in; his mail pouch held one letter.”

“During a very cold spell, Lieutenant Billy Mitchell drove his dog team down the trail from Eagle to meet the mail carrier.  When he found him, the mail carrier was sitting on his sled, frozen solid, even though he had wood gathered in front of him for a fire and a match in his hand.” 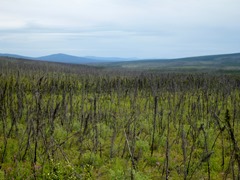 The forest regenerating from a huge fire in 2005. 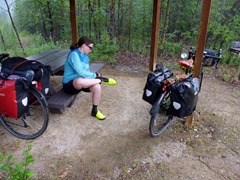 Preparing on another rainy morning. 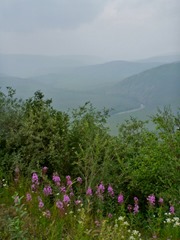 Looking down on the 40 Mile River.

In 1902, a local post office in the region was trying to decide on a name.  There were lots of ptarmigans in the area so they thought they would call the town Ptarmigan.  The only problem was, they couldn’t agree on the proper spelling.  Not wanting to be embarrassed, they called the town “Chicken” instead. 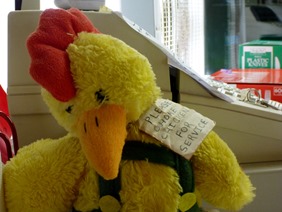 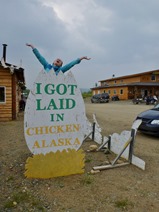 We didn’t choke the chicken … there was already someone behind the counter.

Climbing a steep hill outside Chicken, some guy pulled up alongside Jenn and told her that if we can make it 10 more miles to Boundary there is an old cabin that cyclists can stay in.  We made it to Boundary and found the cabin, but thought we’d be safer in the sound structure of our tent. 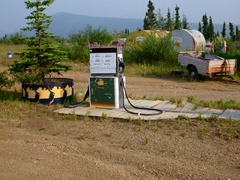 The Boundary gas pump … I wonder if it still works?

How do you know how cold it is when your thermometer is frozen?  Trader Leroy McQuestem used some of his supplies to gauge the cold in the winter:
- Quicksilver (mercury) froze at –40F
- Coal oil froze at -50F
- Jamaica ginger froze at -60F
- Perry Davis’ painkiller froze at –75F

The Top of the World Highway follows more old prospector routes.  It crosses from Alaska into the Yukon and then stays more or less on a ridge for 100km to Dawson City.  It’s truly gorgeous.  People come from all over the world to drive it. 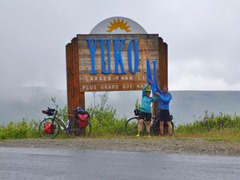 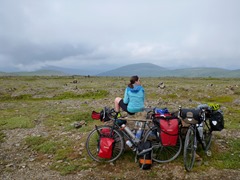 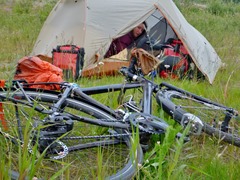 Checking out the view from a summit.  And setting up shop for the night.  Easy campsites were abundant. 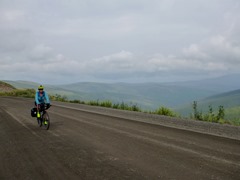 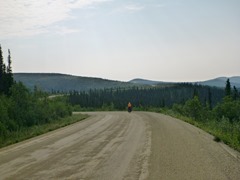 Continuing along the ridge tops.

Now we’re resting our tired legs in Dawson City and filling up on more tall tales of hard men and women.  Stay tuned…