On this leg of our trip we crossed from the lake district of Chile to that of Argentina.  We rode through three incredible national parks in the two countries and along Argentina’s famous “Seven Lakes Route”.  It wasn’t the most direct route, but the best ones rarely are.  This is what cycle touring really is about.

The road from Pucon, Chile to the border took us through Parque Nacional Villarrica along a steep and difficult, but beautiful, dirt road. 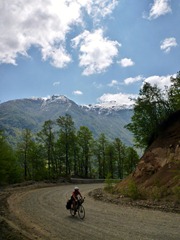 Jenn climbing on a loose surface. 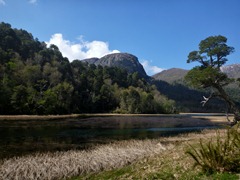 Parque Nacional Villarrica (Chile) meets Parque Nacional Lanin (Argentina) at the border.  But we were surprised at the marked difference as we crossed the boundary between the two.  The landscape on the Chilean side was lush and green.  It was filled with lakes, rivers, and dense trees.  And then we passed the border and the landscape suddenly became more arid and dry.  The trees were more spread out and the undergrowth thinner.

Along with the landscape, there was a marked difference in the border control which showcases some of the differences between the two countries.  In Chile everything was very professional, but bureaucratic, slow and confusing.  Our documents were scrutinized and all the rules were followed.  But when we arrived at the Argentinian border post, we were greeted warmly by officers outside drinking mate (an Argentinian tea drink).  Inside the building music was blaring and the officials were busy making fun of the Chinese – Chilean family in front of us because they had given their kids Spanish names instead of Chinese ones.  There were no signs, but everyone pointed us in the right direction.  At customs the official amused himself for a few minutes by flipping through our passports and asking us about some of the countries we had visited … never bothering to check if we were carrying fruits or vegetables (good thing for us). 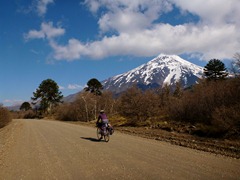 Through the border on the Argentinian side.  Volcan Lanin in the background. 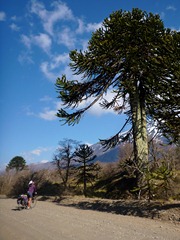 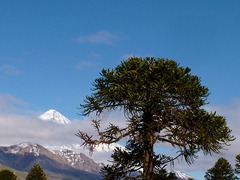 After a brief stop with a wonderful family in the picturesque town of San Martin de Los Andes, we continued along the “Ruta de Siete Lagos” (Seven Lakes Road) to Villa La Angostura and Bariloche.  This is a particularly beautiful section of mostly paved road which passes seven large lakes with a backdrop of the Andes.  It’s only fitting that we show the route with seven pictures. 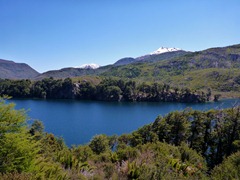 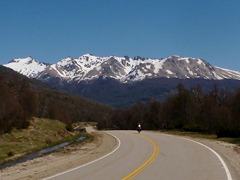 Riding alongside the snowy Andes. 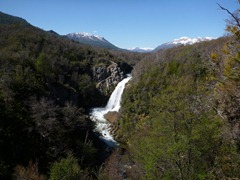 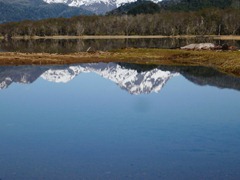 Morning view from our campsite on Lago Villarino. 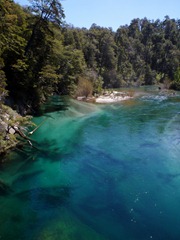 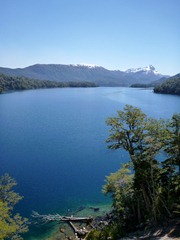 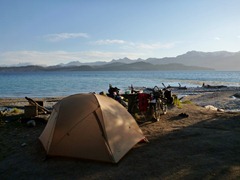 Camped alongside Lago Nahuel Huapi.  Jenn trying to catch dinner and a bottle of wine for a consolation prize. 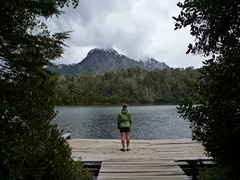 And now we pass a few days in Bariloche, Argentina waiting to get Dave’s front rack welded.  It is a beautiful lakeside city, surrounded by dramatic mountains and filled with chocolate shops … we don’t mind at all. 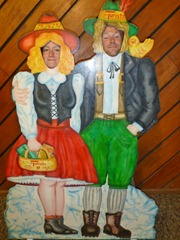