One Hand in My Pocket

We have been in Bolivia for two weeks now and for such a small place it is a land of extremes.  From the abundance, heat and humidity of the jungle…

The “Death Road” drops over 3000m in 65km and over 25 vehicles would plunge over it’s side annually while it was still in use. 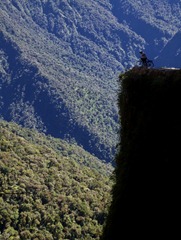 To the cold, bleak and dry altiplano… 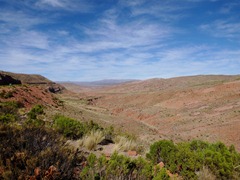 To the many sides of the culturally advanced capital, La Paz. 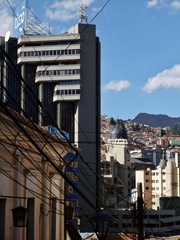 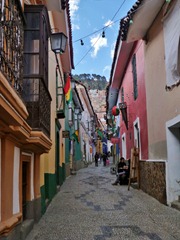 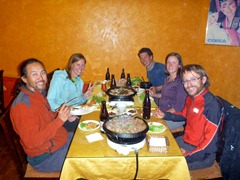 Enjoying a delicious Korean meal with fellow cyclists from the Casa de Ciclistas in La Paz: Tauru and Christie, Julian, and Martin.

After leaving La Paz we headed south across the altiplano to Oruro.  We arrived in time to celebrate our anniversary and the anniversary of Bolivia’s independence.  It was a night and a day full of parades, fireworks and an appearance by the current and controversial president Evo Morales.

Unfortunately in the hustle and bustle of the crowd someone took it upon themselves to relieve Dave of his wallet (thankfully he didn’t have the camera too, hence no photos in this section).  On top of that, the next morning Dave caught a youngster taking a reach inside his already empty pocket.  Thus reinforcing the negative vibe we have been on the receiving end of here.  We can’t help but feel like somebody’s hand is always in our pockets.  We consistently have to fight for fair pricing and services.  No one goes out of their way here to enhance our “tourist” experience, but everyone wants a piece of the pie bought with our tourist dollars.

Trying to keep an open mind and focus on the good experiences we continued 300km through the difficult riding of the Cordillera de los Frailes to Potosi. 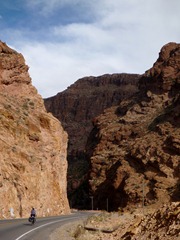 Riding into La Puerta (the door) for the final climb to Potosi.

Despite Bolivia being the country most rich in mineral resources in South America it is also the poorest.  This is due largely in part to the exploitation and mismanagement of these resources by the conquering Spanish.  The most important mineral was, and still is silver. 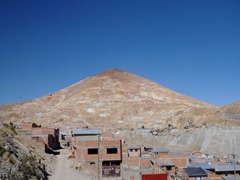 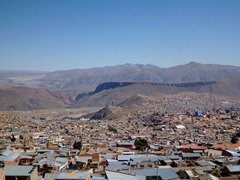 Cerro Rico (Rich Mountain) looking over the town of Potosi, once the biggest city in the world due to it’s mineral wealth.

However, even though most deposits have been all but depleted, the people here once physically forced to work in the horrible conditions of the mines are now forced to do so out of necessity.  Despite the fact that over eight million people have died extracting silver from Potosi’s Cerro Rico, thousands of men, and boys as young as ten, still come to work here everyday.

We decided to experience the mines for ourselves on an eye-opening tour. 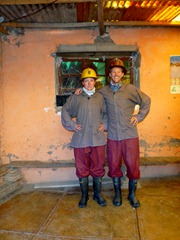 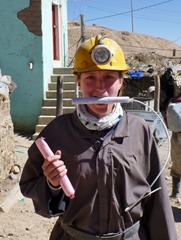 Ready to go in our protective gear, but it won’t do anything for that stick of dynamite in Jenn’s mouth. 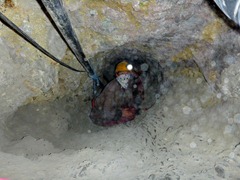 The conditions are tough, the tunnels small, wet and treacherous, the air dusty and toxic and the temperatures vary from freezing to 40 degrees Celsius. 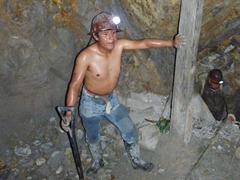 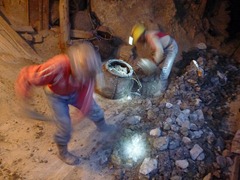 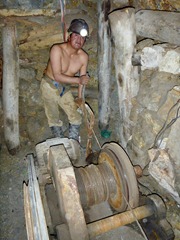 To keep them safe in the mines the miners worship a form of the Devil called “El Tio”.  Being the ruler of the underworld he protects them if they make offers of cigarettes, coca leaves (which they chew constantly to increase energy and stave off hunger) and alcohol.  Even if they survive the constant threat of explosions, collapses and carbon monoxide most will not survive more than 20 years in the mines due to the inhalation of silica dust and the deadly illness it causes, silicosis pneumonia. 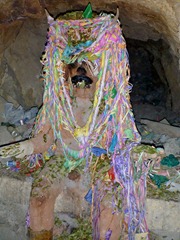 All this for silver.  So the rich could have their silver spoons and oddities like llama shaped pipes. 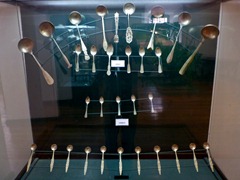 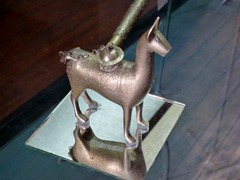 From here it’s back out of the mountains to Uyuni, on the edge of the world’s largest salt flat, to prepare for our ride across it and into Bolivia’s famously beautiful Lagoon Region.