Shades of the Southwest

If you imagine the south western United States as being home to gun-toting rednecks and cowboys, you are partly correct. Never before have I seen so many trucks with rifle racks in the back and this morning I saw my first real cowboy up close. I noticed him because of the sound his spurs made when he walked. That being said Texas is one of the most friendly states we’ve been in. Normally I would be terrified riding into a city like El Paso (pop. 650 000) on a three lane highway with no shoulders, but the drivers here all gave us plenty of space.

Looks like they really live up to this motto: “Drive friendly, the Texas way”. 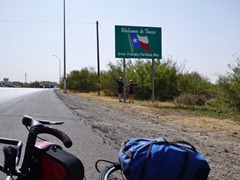 In reality the southwest is a culturally rich and diverse population of the above mentioned folks, Native-Americans and Latin-Americans. On our way out of Arizona we rode through a very large Apache reservation and tried fried bread for the first time. It was wrapped around refried beans and cheese. 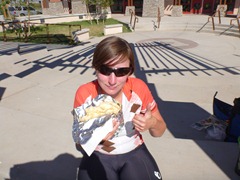 From the vendor we learned that a girl in the community was just completing a coming of age ceremony that had her dancing for 7 days!

Upon arriving in New Mexico it became very apparent a large part of the area’s economy is built on mining.

Chino open pit copper mine, one of the world’s largest. 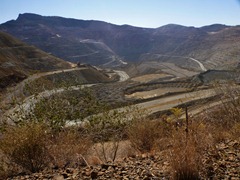 Our first stop in the state was Silver City. Named because… silver was discovered here. Larger copper mining operations outside the city are still the basis of the local economy but so are tourism and the arts. Did you know Billy the Kid lived and was arrested for the first time here? There were also many great galleries featuring local native art utilizing a lot of silver and turquoise which is also mined locally. We really began seeing the Latin influence here as well with the lead up to Dia De Los Muertos. 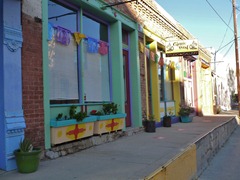 We took a rest day here staying at the 1920’s Palace Hotel. 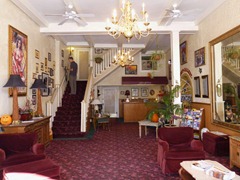 Views on the climb out of Silver City, through the Black Mountains at Emory Pass. 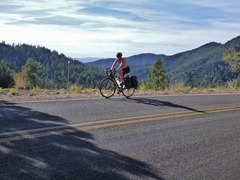 The US economic downturn is very apparent in many of the smaller towns built around the mines here. Many businesses are boarded up now, or only open a few hours a day (a big let down if you get in to town after 4pm). The main survivors have been the bars. People’s generousity seems unaffected though. In Hillsboro, Jim ensured we were watered and well fed; bringing us ham and cheese bagel sandwich’s for dinner and coffee in the morning. In Hatch an older couple gave us their remaining pizza for lunch.

Hatch’s climate seemed to lend itself to be a large producer of cotton and chilis. We rode past fields and fields of these and couldn’t resist playing in them. 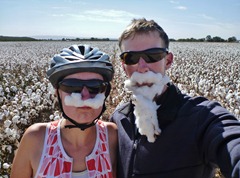 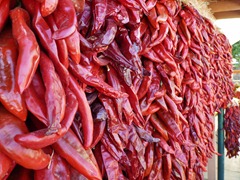 The day we crossed in to Texas we stopped at a roadside taco shack to take shelter from the 60mph wind gusts and blowing dust and found the most delicious tacos. Our first stop was El Paso and it’s right on the border with Mexico. It is the world’s largest bilingual metropolis on an international border. 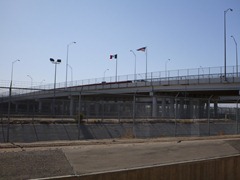 We took another rest day in El Paso and even splurged $19 on a rental car so we could spend a day at Hueco Tanks. From the outside it looks like a little choss mountain. Really it’s a great pile of igneous rock that was left behind when the surrounding limestone eroded away. Time and the elements left the rocks full of huecos (hollows) that act as catch basins for the precious little rain that falls here. This has made it an oasis in the desert; drawing many different people over thousands of years. 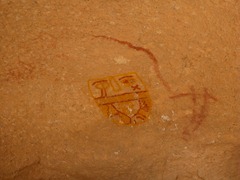 These huecos are also great for climbing and the bouldering was fantastic. 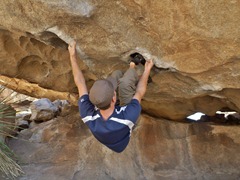 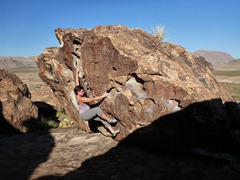 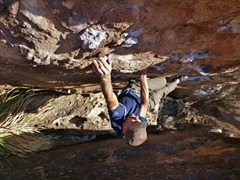 Since then Texas has consisted of more than normal amounts of wind. This is ok when it’s favouring your direction of travel (yesterday we broke our record, covering 143km). Today it was not. It was our last big climb for some time taking us through beautiful country past the McDonald observatory into Fort Davis, where for the first time on the trip we arrived well after dark. The grocery clerk could visibly see our chill and treated us to our choice from the cappuccino machine. Now we’re snuggled up in a motel, resting up for tomorrow.

Email ThisBlogThis!Share to TwitterShare to FacebookShare to Pinterest
Etiquetas: Nevada to New Mexico, South, Texas to Louisiana, US